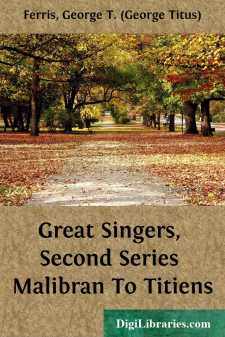 The Childhood of Maria Garcia.—Her Father's Sternness and Severe Discipline.—Her First Appearance as an Artist on the Operatic Stage.—Her Genius and Power evident from the Beginning.—Anecdotes of her Early Career.—Manuel Garcia's Operatic Enterprise in New York.—Maria Garcia is inveigled into marrying M. Malibran.—Failure of the Garcia Opera, and Maria's Separation from her Husband.—She makes her Début in Paris with Great Success.—Madame Malibran's Characteristics as a Singer, a Genius, and a Woman.—Anecdotes of her Generosity and Kindness.—She sings in a Great London Engagement.—Her Eccentric and Daring Methods excite Severe Criticism.—Her Reckless Expenditure of Strength in the Pursuit of her Profession or Pleasures.—Madame Malibran's Attachment to De Bériot.—Anecdotes of her Public and Private Career.—Malibran in Italy, where she becomes the Popular Idol.—Her Last London Engagement.—Her Death at Manchester during the Great Musical Festival.

With the name of Malibran there is associated an interest, alike personal and artistic, rarely equaled and certainly unsurpassed among the traditions which make the records of the lyric stage so fascinating. Daring originality stamped her life as a woman, her career as an artist, and the brightness with which her star shone through a brief and stormy history had something akin in it to the dazzling but capricious passage of a meteor. If Pasta was the Siddons of the lyric drama, unapproachable in its more severe and tragic phases, Malibran represented its Garrick. Brilliant, creative, and versatile, she sang equally well in all styles of music, and no strain on her resources seemed to overtax the power of an artistic imagination which delighted in vanquishing obstacles and transforming native defects into new beauties, an attribute of genius which she shared in equal degree with Pasta, though it took on a different manifestation.

This great singer belonged to a Spanish family of musicians, who have been well characterized as "representative artists, whose power, genius, and originality have impressed a permanent trace on the record of the methods of vocal execution and ornament." Her father, Manuel Vicente Garcia, at the age of seventeen, was already well known as composer, singer, actor, and conductor. His pieces, short comic operas, had a great popularity in Spain, and were not only bright and inventive, but marked by thorough musical workmanship. A month after he made his début in Paris, in 1811, he had become the chief singer, and sang for three years under the operatic regime which shared the general splendor of Napoleon's court. He was afterward appointed first tenor at Naples by King Joachim Munit, and there produced his opera of "Califo di Bagdad," which met with great success. It was here that the child Maria, then only five years old, made her first public appearance in one of Paer's operas, and here that she received her first lessons in music from M. Panseron and the composer Hérold....