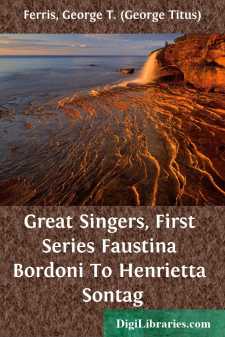 The Art-Battles of Handel's Time.—The Feud between Cuzzoni and Faustina.—The Character of the Two Rivals as Women and Artists.—Faustina's Career.—Her Marriage with Adolph Hasse, and something about the Composer's Music.—Their Dresden Life.—Cuzzoni's Latter Years.—Sketch of the Great Singer Farinelli.—The Old Age of hasse and Faustina.

During the early portion of the eighteenth century the art of the stage excited the interests and passions of the English public to a degree never equaled since. Politics and religion hardly surpassed it in the power of creating cabals and sects and in stirring up animosities. This was specially marked in music. The great Handel, who had not then found his true vocation as an oratorio composer, was in the culmination of his power as manager of the opera, though he was irritated by hostile factions. The musical quarrels of the time were almost as interesting as the Gluck-Piccini war in Paris in the latter part of the same century, and the literati took part in it with a zest and wit not less piquant and noticeable. Handel, serenely grand in his musical conceptions, was personally passionate and fretful; and the contest of satire, scandal, and witticism raged without intermission between him and his rivals, supported on each hand by princes and nobles, and also by the great dignitaries of the republic of letters. In this tumult the singers (always a genus irritabile, like the race of poets) who belonged to the opera companies took an active part.

Not the least noteworthy episode of this conflict was the feud between two foremost sirens of the lyric stage, Francesca Cuzzoni and Faustina Bordoni. When the brilliant Faustina appeared in London, as a fresh importation of Handel, who was as indefatigable in purveying novelties as any modern Mapleson or Strakosch, Cuzzoni was the idol of the public, having succeeded to that honor after Anastasia Robinson retired from the stage as Countess of Peterborough. Handel some years before had introduced Cuzzoni to the English stage, and, though kept in constant turmoil by her insolence and caprice, had taken great pains to display her fine voice by the composition of airs specially suited to her. It is recorded that one morning, after she had refused at rehearsal to sing a song written for her by the master, such rage took possession of Handel that he seized her fiercely, and threatened to hurl her from the window unless she succumbed. One of the arias composed for this singer extorted from Main-waring, a musician bitterly at odds with Handel, the remark, "The great bear was certainly inspired when he wrote that song."

Cuzzoni's popularity with the public had so augmented her native conceit and insolence as to make a rival unbearable. Though she was ugly and ill made, of a turbulent and obstinate temper, ungrateful and capricious, she deported herself as if she possessed all the graces of beauty, art, and genius, and regarded the allegiance of the public as her native right....