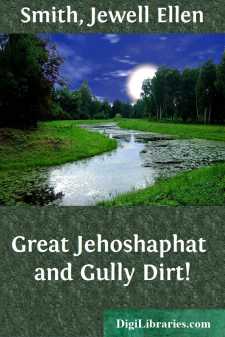 An usher I'd not seen before carefully wheeled my chair down the center aisle and over to the right so that I would be facing the pulpit. Most Sunday mornings I sat on the opposite side of the church. But this usher didn't know that. Oh well, no matter.

The usher was saying something to me, but before I could adjust my hearing aid, I had to push my shawl back and slip a glove. By then, he had quit talking.

He let my chair roll to a stop so close to the chancel rail. I could have reached out and kicked it with my foot—that is, I had been in the mood to kick a chancel railing and if I could have moved either foot.

I was almost in a kicking mood!

No, no! I shouldn't think of such a thing as kicking that brass rail. I should be wishing I could kneel down before it. Somehow, though, my mind wasn't on praying.

The usher stepped back, then hesitated.

"Will this be all right, Mrs. Goode? Can you hear Dr. Shirey's sermon from here? Or would you rather be a little over toward the choir and the organ?"

"This is fine. Thank you kindly." I was surprised the man knew my name.

He smiled and handed me the morning bulletin.

The minute the usher's back was turned, I clicked off my hearing aid so that I wouldn't have to listen to the pastor's sermon, the organ, or anything else. I just wanted—well, I didn't know exactly what I wanted.

The only reason in this round world I kept coming to Central Avenue Church was that it was right across the street from Crestview Rest Home, and I had to get out and away from that place once in a while. Crestview wasn't so bad, as nursing homes go. In fact, it was all right. Still, any rest home is a sad comedown from one's own house—and such a change.

As the congregation filed in, I looked about me. The sanctuary, quiet and beautiful with its stained-glass windows, its high, arched ceiling, and its deep carpets, was the only serene spot I had found since I came to the city. Out on the streets all was rush, confusion, turmoil—enough to drive one to distraction.

Here, too, I managed to block out for a little while the feeling of helplessness I'd had since I became so frail. The doctors kept saying that my general condition was good and my arthritis might improve some. But as yet I couldn't see much change.

To make myself lift my head and quit looking at my stiff, swollen knees, I turned toward the nearest window. I liked those green velvet curtains and the matching cushions on the pews. Both were the exact color of an Arkansas pine in early spring, when it takes on new life and puts forth myriads of tender buds, each a creamy, candle-like shoot, lovely enough to adorn a sacred altar.

I gazed at the candles on the altar and at the open Bible, crisscrossed with its narrow scarlet ribbons. The sight of that Bible was always a pleasure. It brought back memories my old church down at Drake Eye Springs—small, standing so calm in its grove of aged white oaks.

That little church had everything a big church has—except a steeple. But the colored folks up at Sweet Beulah Hill had a steeple....