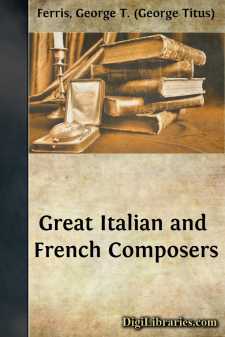 The Netherlands share other glories than that of having nursed the most indomitable spirit of liberty known to mediteval Europe. The fine as well as the industrial arts found among this remarkable people, distinguished by Erasmus as possessed of the patientia laboris, an eager and passionate culture. The early contributions of the Low Countries to the growth of the pictorial art are well known to all. But to most it will be a revelation that the Belgian school of music was the great fructifying influence of the fifteenth century, to which Italy and Germany owe a debt not easily measured. The art of interweaving parts and that science of sound known as counterpoint were placed by this school of musical scholars and workers on a solid basis, which enabled the great composers who came after them to build their beautiful tone fabrics in forms of imperishable beauty and symmetry. For a long time most of the great Italian churches had Belgian chapel-masters, and the value of their example and teachings was vital in its relation to Italian music.

The last great master among the Belgians, and, after Palestrina, the greatest of the sixteenth century, was Orlando di Lasso, born in Hainault, in the year 1520. His life of a little more than three score years and ten was divided between Italy and Germany. He left the deep imprint of his severe style, though but a young man, on his Italian confrères, and the young Palestrina owed to him much of the largeness and beauty of form through which he poured his genius in the creation of such works as have given him so distinct a place in musical history. The pope created Orlando di Lasso Knight of the Golden Spur, and sought to keep him in Italy. Unconcerned as to fame, the gentle, peaceful musician lived for his art alone, and the flattering expressions of the great were not so much enjoyed as endured by him. A musical historian, Heimsoeth, says of him: "He is the brilliant master of the North, great and sublime in sacred composition, of inexhaustible invention, displaying much breadth, variety, and depth in his treatment; he delights in full and powerful harmonies, yet, after all—owing to an existence passed in journeys, as well as service at court, and occupied at the same time with both sacred and secular music—he came short of that lofty, solemn tone which pervades the works of the great master of the South, Palestrina, who with advancing years restricted himself more and more to church music." Of the celebrated penitential psalms of Di Lasso, it is said that Charles IX. of France ordered them to be written "in order to obtain rest for his soul after the horrible massacre of St. Bartholomew." Aside from his works, this musician has a claim on fame through his lasting improvements in musical form and method. He illuminated, and at the same time closed, the great epoch of Belgian ascendancy, which had given three hundred musicians of great science to the times in which they lived. So much has been said of Orlando di Lasso, for he was the model and Mentor of the greatest of early church composers, Palestrina....