Great Indian Chief of the West Or, Life and Adventures of Black Hawk 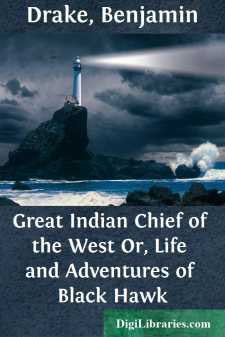 Origin of the Sac and Fox Indians—Removal to Green Bay—Their subjugation of the Illini confederacy—Their attack upon St. Louis in 1779—Col. George Rogers Clark relieves the town—Governor Harrison's letter—Maj. Forsyth's account of the conquest of the Illini—Death of the Sac chief Pontiac—Sac and Fox village on Rock river—Description of the surrounding country—Civil polity of the Sacs and Foxes—Legend about their chiefs—Division of the tribes into families—Mode of burying their dead—Idea of a future state—Their account of the creation of the world—Marriages—Social relations—Music and musical instruments—Pike's visit to them in 1805—Population—Character for courage.

The word Saukee, or O-sau-kee, now written Sauk or more commonly Sac, is derived from a compound in the Algonquin or Chippeway language, a-saw-we-kee, which means "yellow earth." Mus-qua-kee, the name of the Fox Indians, signifies "red earth." These two tribes have long resided together, and now constitute one people, although there are some internal regulations among them which tend to preserve a distinctive name and lineage. The chiefs, on ceremonial occasions, claim to be representatives of independent tribes, but this distinction is nominal. For many years past the principal chief of the Sacs, has been, in fact, the chief of the Foxes likewise. They are united in peace and war, speak the same language, claim the same territory, have similar manners and customs, and possess traditions which represent them as descended from the one common origin—the great Chippeway nation.

Both tribes originally resided upon the waters of the St. Lawrence. The Foxes removed first to the west, and established themselves in the region of Green Bay. Upon a river bearing their name, which empties into the head of this Bay, they suffered a signal defeat by a combined body of French and Indians, at a place, since known as La Butte de Mort, or the Hill of the Dead. Subsequently to this battle, they were joined by the Sacs, who having become involved in a war with the Iroquois or Six Nations, were also driven to the westward. They found their relatives, the Foxes, upon Green Bay, but so far reduced in numbers, by the attacks of other tribes, that they were no longer able to sustain themselves as an independent people. The union between these two tribes, which then took place, and continues to this day, was as much a matter of necessity as of feeling. The period of their migration from the St. Lawrence to the upper Lakes cannot be satisfactorily ascertained. La Hontan speaks of a Sac village on Fox river, as early as 1689; and Father Hennepin, in 1680, mentions the Ontagamies or Fox Indians, as residents on the bay of Puants, now Green Bay.

From this place, the Sauks and Foxes, crossed over to the eastern bank of the Mississippi, and combining with other tribes, began to act on the offensive. The period of this irruption from the north, it is not easy to determine. Major Thomas Forsyth, who resided for near twenty years among the Sauks and Foxes, in a manuscript account of those tribes, now before us, says:

"More than a century ago, all the country, commencing above Rock river, and running down the Mississippi to the mouth of the Ohio, up that river to the mouth of the Wabash, thence up that river to Fort Wayne, thence down the Miami of the Lake some distance, thence north to the St. Joseph's and Chicago; also the country lying south of the Des Moines, down perhaps, to the Mississippi, was inhabited by a numerous nation of Indians, who called themselves Linneway, and were called by others, Minneway, signifying "men." This great nation was divided into several bands, and inhabited different parts of this extensive region, as follows: The Michigamies, the country south of the Des Moines; the Cohakias that east of the present village of Cohokia in Illinois; the Kaskaskias that east of the town of that name; the Tamarois had their village nearly central between Cahokia and Kaskaskia; the Piankeshaws near Vincennes; the Weas up the Wabash; the Miamies on the head waters of the Miami of the Lakes, on St. Joseph's river and at Chicago....