Great Fortunes, and How They Were Made 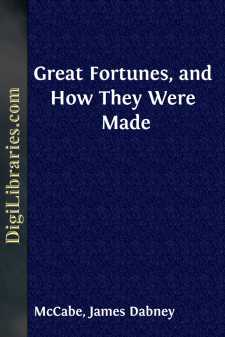 One May morning, in the year 1776, the mouth of the Delaware Bay was shrouded in a dense fog, which cleared away toward noon, and revealed several vessels just off the capes. From one of these, a sloop, floated the flag of France and a signal of distress. An American ship ran alongside the stranger, in answer to her signal, and found that the French captain had lost his reckoning in a fog, and was in total ignorance of his whereabouts. His vessel, he said, was bound from New Orleans to a Canadian port, and he was anxious to proceed on his voyage. The American skipper informed him of his locality, and also apprised him of the fact that war had broken out between the colonies and Great Britain, and that the American coast was so well lined with British cruisers that he would never reach port but as a prize. "What shall I do?" cried the Frenchman, in great alarm. "Enter the bay, and make a push for Philadelphia," was the reply. "It is your only chance."

The Frenchman protested that he did not know the way, and had no pilot. The American captain, pitying his distress, found him a pilot, and even loaned him five dollars, which the pilot demanded in advance. The sloop got under weigh again, and passed into the Delaware, beyond the defenses which had been erected for its protection, just in time to avoid capture by a British war vessel which now made its appearance at the mouth of the bay. Philadelphia was reached in due time, and, as the war bade fair to put an end to his voyages, the captain sold the sloop and her cargo, of which he was part owner, and, entering a small store in Water Street, began the business of a grocer and wine-bottler. His capital was small, his business trifling in extent, and he himself labored under the disadvantage of being almost unable to speak the English language. In person he was short and stout, with a dull, repulsive countenance, which his bushy eyebrows and solitary eye (being blind in the other) made almost hideous. He was cold and reserved in manner, and was disliked by his neighbors, the most of whom were afraid of him.

This man was Stephen Girard, who was afterward destined to play so important a part in the history of the city to which the mere chances of war sent him a stranger.

He was born at Bordeaux, in France, on the 21st of May, 1750, and was the eldest of the five children of Captain Pierre Girard, a mariner of that city. His life at home was a hard one. At the age of eight years, he discovered that he was blind in one eye, and the mortification and grief which this discovery caused him appear to have soured his entire life. He afterward declared that his father treated him with considerable neglect, and that, while his younger brothers were sent to college, he was made to content himself with the barest rudiments of an education, with merely a knowledge of reading and writing. When he was quite young, his mother died, and, as his father soon married again, the severity of a step-mother was added to his other troubles....