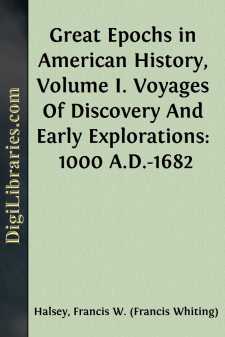 Schoolboys have been taught from their earliest years that Columbus discovered America. Few events in prehistoric times seem more probable now than that Columbus was not the first to discover it. The importance of his achievement over that of others lay in his own faith in his success, in his definiteness of purpose, and in the fact that he awakened in Europe an interest in the discovery that led to further explorations, disclosing a new continent and ending in permanent settlements.

The earliest voyages to America, made probably from Asia, led to settlements, but they remained unknown ever afterward to all save the settlers themselves, while those from Europe led to settlements that were either soon abandoned or otherwise came to nought. Wandering Tatar, Chinese, Japanese, Malay, or Polynesian sailors who drifted, intentionally or accidentally, to the Pacific coast in some unrecorded and prehistoric past, and from whom the men we call our aborigines probably are descended, sent back to Asia no tidings of what they had found. Their discovery, in so far as it concerned the people of the Old World, remained as if it had never been.

The hardy Northmen of the Viking age, who, like John Smith, six hundred years afterward, found in Vinland "a pleasant land to see," understood so little of the importance of what they had found, that, by the next century, their discovery had virtually been forgotten in all Scandinavia. It seems never to have become known anywhere else in Europe. Indeed, had the Northmen made it known to other Europeans, it is quite unlikely that any active interest would have been taken in it. Europe in the year 1000 was self-centered. She had troubles enough to absorb all her energies. Ambition for the expansion of her territory, for trade with peoples beyond the great waters, nowhere existed. Most European states were engaged in a grim struggle to hold what they had—to hold it from the aggressions of their neighbors, to hold it against the rising power of Islam.

Columbus did not know he had discovered the continent we call America. He died in the belief that he had found unknown parts of Asia; that he had discovered a shorter and safer route for trade with the East, and that he had given new proof of the assertions made by astronomers that the earth is round. The men who immediately followed him—Vespucius and the Cabots—believed only that they had confirmed and extended his discovery. Cabot first found the mainland of North America, Vespucius the mainland of South America, but neither knew he had found a new continent. Each saw only coast lines; made landings, it is true; saw and conversed with natives, and Vespucius fought with natives; but of the existence of a new world, having continents comparable to Europe, Asia, or Africa, with an ocean on both sides of them, neither ever so much as dreamed.

Under the splendid inspiration of Prince Henry the Navigator, an inspiration that remained potent throughout Portugal long after his death, Bartholomew Dias, five years before Columbus made his voyage to America, rounded the Cape of Good Hope, actually sailed into the Indian Ocean, and was pressing on toward India when his crew, from exhaustion, refused to go farther, and he was forced to return home....