Great African Travellers From Mungo Park to Livingstone and Stanley 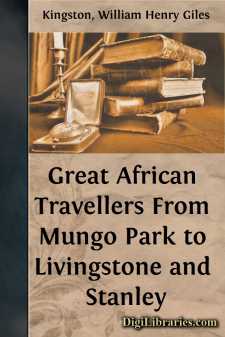 When the fathers of the present generation were young men, and George the Third ruled the land, they imagined that the whole interior of Africa was one howling wilderness of burning sand, roamed over by brown tribes in the north and south, and by black tribes—if human beings there were—on either side of the equator, and along the west coast.

The maps then existing afforded them no information. Of the Mountains of the Moon they knew about as much as of the mountains in the moon. The Nile was not explored—its sources unknown—the course of the Niger was a mystery. They were aware that the elephant, rhinoceros, cameleopard, zebra, lion and many other strange beasts ranged over its sandy deserts; but very little more about them than the fact of their existence was known. They knew that on the north coast dwelt the descendants of the Greek and Roman colonists, and of their Arab conquerors—that there were such places as Tangiers, Tripoli, Tunis, Algiers with its piratical cruisers who carried off white men into slavery; Morocco, with an emperor addicted to cutting off heads; Salee, which sent forth its rovers far over the ocean to plunder merchantmen; and a few other towns and forts, for the possession of which Europeans had occasionally knocked their heads together.

From the west coast they had heard that ivory and gold-dust was to be procured, as well as an abundant supply of negroes, whose happy lot it was to be carried off to cultivate the plantations of the West Indies and America; but, except that they worshipped fetishes, of their manners and customs, or at what distance from the coast they came, their ignorance was profound. They possibly were acquainted with the fact that the Portuguese had settlements at Loango, Angola, and Benguela; and that Hottentots and Kaffirs were to be found at the Cape, where a colony had been taken from the Dutch, but with that colony, except in the immediate neighbourhood of Cape Town, where ships to and from India touched, they were but slightly acquainted.

Eastward, if they troubled their heads about the matter, they had a notion that there was a terribly wild coast, inhabited by fierce savages, and northward, inside the big island of Madagascar, that the Portuguese had some settlements for slaving purposes; that further north again was Zanzibar, and that the mainland was without a town or spot where civilised man was to be found, till the Strait of Bab el Mandeb, at the mouth of the Red Sea, was reached. That there, towards the interior, was the wonderful country of Abyssinia, in which the Queen of Sheba once ruled, and Nubia, the birthplace from time immemorial of black slaves, and that, flowing northward, the mysterious Nile made its way down numerous cataracts, fertilising the land of Egypt on its annual overflows, till, passing the great city of Cairo, it entered the Mediterranean by its numberless mouths.

About Egypt, to be sure, more was known than of all the rest of the continent together—that there were pyramids and ruined cities, colossal statues, temples and tombs, crocodiles and hippopotami in the waters of the sacred river, and Christian Copts and dark-skinned Mahommedans dwelling on its banks....