Grasshopper Green and the Meadow Mice 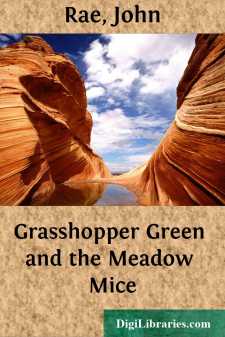 f Course you know the story of "The Grasshopper and the Ant"—how one autumn, when the winds were growing raw and cold and the nights frosty, the poor Grasshopper, who hadn't done anything but fiddle and dance all through the pleasant summer and had nothing laid by for the hard winter, went to the thrifty Ant and asked for a bite to eat and a chance to warm his toes in the chimney corner. And how the tight-fisted Ant refused and said to the shivering Grasshopper, "Keep on fiddling and dancing, it may help to keep you warm!"

This always seemed to me so cruel.

Now you've probably wondered, just as I used to, whatever finally became of that Grasshopper.

Well, dear old Great-Grandfather Goodheart, who knows all about such things, told me the story one rainy day as we sat by the open fire roasting chestnuts. I enjoyed it so much that I'm sure you will too.

Now, make yourself comfortable and cozy and listen.

After the sneering Ant had banged the door in his face, Grasshopper Green felt, as you may imagine, miserable, forlorn and friendless.

It was growing dark. He turned up the collar of his threadbare claw-hammer coat and shuffled along over the frozen ground, scarcely noticing where his benumbed feet were taking him.

He tried wrapping himself in a fallen leaf; it was red and looked as though it might be warm. But, alas! it proved to be a very thin covering against the biting, icy wind.

He tried to cheer himself up by playing on his little fiddle, but his fingers were too cold to play lively, cheerful tunes.

At last, feeling too chilled and hungry and discouraged to go any further, he sank down at the foot of an old apple tree. This was some protection at least from the wintry blasts which, by now, were moaning, "Whoo-ooh-whee-eeeh!" among the bare branches in a very disheartening way.

Poor Grasshopper Green wrapped his leaf cape tightly about him and, in spite of his chattering teeth, finally fell into an uneasy sleep.

He dreamed that he was wandering over an immense field of ice. Suddenly there appeared before him a little red table, upon which was a large yellow bowl of steaming, fragrant broth! Beside the table stood a chair, over the back of which was thrown a thick, fur-lined coat.

Just as he reached for the coat, he heard a terrific howling, and the next moment a gigantic hand had swept past him, snatching away the coat and the soup, and so terrifying Grasshopper Green that he fell over backward—and awoke.

"Well, singe my whiskers, what's this? What's this?" he heard a hearty voice exclaiming, and, looking up, was astonished to find himself in the cosy home of a family of Meadow-Mice!

This is how it had happened. When Grasshopper Green sank down exhausted among the roots of the old apple tree, he had not noticed, in the darkness, that he was leaning against a small door; this was the door of the home of the Meadow-Mouse family, who lived here in a hollow part of the tree, near the roots.

An especially strong gust of wind had blown the door open and tumbled Grasshopper Green into the room.

When he sat up and looked about he was not quite sure, at first, that this was not just a part of his dream.

Father and Mother Meadow-Mouse and their four children, Long-Tail, Sharp-Eyes, Pink-Ears, and Mouseykins, had finished their supper of cornbread and cheese, and Father Meadow-Mouse was telling of two narrow escapes he had had the night before, one from a horned owl and one from Farmer Green's cat, Mouser. He had just come to the most exciting part of his adventures and all the family were listening with breathless interest, when the door, which had been left unbolted, blew open, as I have told you, and in tumbled poor Grasshopper Green....