Grandmother Puss, or, The grateful mouse 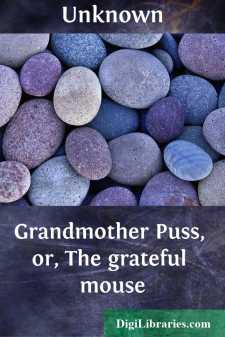 I wish that all the little boys and girls who read this story could see Grandmother Puss; but as they cannot, I will tell you something about her. She is a very large, and handsome old cat of grave aspect, and solemn manners. Her face is black, with white marks around the eyes, and across the nose, which make her look as if she wore spectacles; and she has a grandson called Peter, who lives with her.

When Peter was but six weeks old, he was left an orphan; for some very, very wicked dog had killed his mother! Grandmother Puss at once took the lonely kitten to her heart, with many tears, sharing her milk with him; and as he grew larger, giving him the fattest and most tender mice, she could catch.

I think she spoiled him, as other Grandmothers do. He never watched for mice, and did nothing to earn his own living, but passed his time chiefly in chasing his own tail, and other vain and foolish amusements. Now, there was an old gray rat who lived in a hole, in the cellar. He was always up to some kind of mischief—had spoiled a great deal of milk, and carried off all the cheese he could get his paws on—once he was even seen trying to get away with an egg, which he was rolling gently toward his hole!

He did so much harm, and was so very knowing and sly, that at last Grandmother Puss declared, with tears in her eyes, that she would neither taste, touch, nor handle a single mouse, until she had caught the old gray robber. And she kept her word. She sometimes sat a whole night, watching for the old rogue, but although she often saw him, she could never catch him.

There was also a cunning little mouse, who lived near by. He was called Cooky, because he was once seen lugging off a whole cooky, to give to his lame sister. Now, the wicked old rat tried nearly as hard to catch poor Cooky as Grandmother Puss did to get the old rat; and Cooky was more afraid of the grim old rat, than he was of the cat herself. One night Cooky saw the rat at one end of the cellar, very busy, eating a piece of cheese that he had stolen. So Cooky betook himself to the other end, where he had seen some fine apples, and he was very fond of apples, indeed.

So he crept softly up to the heap, and was just about to taste a fine, juicy one, when the cat saw him. “I said, I would not touch, or taste a mouse,” she said, “but I did not say I would not scare one, and I cannot see these nice apples spoiled—so here goes.” With these words, she made a rush for the mouse, making all the noise she could; which is not usual with cats, you know, which go very softly, in order not to scare the mice before they can catch them.

Cooky, of course, darted away to his hole in a hury, and there peeped out carefully. “Now,” said he to himself, “that cat has a kind look; I’ve a good mind to try, and make a bargain with her, so that I can get something to eat once in a while. Perhaps I can make her promise not to eat me, but it will do no harm to try, and everybody knows that Grandmother Puss is a cat of her word.” So just as Puss was about to start for the other end of the cellar, for a tussle with the old rat, she heard a small squeaking voice, which said, “Please, Grandmother Puss, I want to make a bargain with you.” “A bargain with me!” said Puss, looking about in surprise for the small voice. “What do you mean?”

“Why, I want to come into the cellar whenever I like, and eat whatever scraps I can find, besides taking away a little for my poor, lame sister....