Grandmother Dear A Book for Boys and Girls 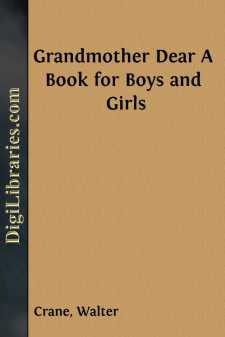 Then they all three stood and looked at each other. Each had his or her own opinion on the subject which was uppermost in their minds, but each was equally reluctant to express it, till that of the others had been got at. So each of the three said "Well?" to the other two, and stood waiting, as if they were playing the old game of "Who speaks first?" It got tiresome, however, after a bit, and Molly, whose patience was the most quickly exhausted, at last threw caution and dignity to the winds.

"Well," she began, but the "well" this time had quite a different tone from the last; "well," she repeated emphatically, "I'm the youngest, and I suppose you'll say I shouldn't give my opinion first, but I just will, for all that. And my opinion is, that she's just as nice as she can be."

"I?" said Ralph loftily, "you forget. I have seen her before."

"Yes, but not to remember," said Sylvia and Molly at once. "You might just as well never have seen her before as far as that goes. But isn't she nice?"

"'For a grandmother!'" cried Molly indignantly. "What do you mean, Ralph? What can be nicer than a nice grandmother?"

"But suppose she wasn't nice? she needn't be, you know. There are grandmothers and grandmothers," persisted Ralph.

"Of course I know that," said Molly. "You don't suppose I thought our grandmother was everybody's grandmother, you silly boy. What I say is she's just like a real grandmother—not like Nora Leslie's, who is always scolding Nora's mother for spoiling her children, and wears such grand, quite young lady dresses, and has black hair," with an accent of profound disgust, "not nice, beautiful, soft, silver hair, like our grandmother's. Now, isn't it true, Sylvia, isn't our grandmother just like a real one?"

Sylvia smiled. "Yes, exactly," she replied. "She would almost do for a fairy godmother, if only she had a stick with a gold knob."

"Only perhaps she'd beat us with it," said Ralph.

"Oh no, not beat us," cried Molly, dancing about. "It would be worse than that. If we were naughty she'd point it at us, and then we'd all three turn into toads, or frogs, or white mice. Oh, just fancy! I am so glad she hasn't got a gold-headed stick."

"Children," said a voice at the door, which made them all jump, though it was such a kind, cheery voice. "Aren't you ready for tea? I'm glad to see you are not very tired, but you must be hungry. Remember that you've travelled a good way to-day."

"And the day after to-morrow you have to travel a long way farther," continued her grandmother. "You must get early to bed, and keep yourselves fresh for all that is before you. Aunty says she is very hungry, so you little people must be so too. Yes, dears, you may run downstairs first, and I'll come quietly after you; I am not so young as I have been, you know."

Molly looked up with some puzzle in her eyes at this....