Grammar and Vocabulary of the Lau Language, Solomon Islands 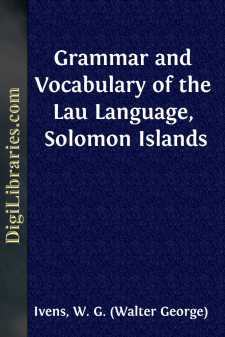 Lau is the name given to the language spoken by the inhabitants of the artificial islets which lie off the northeast coast of Big Malaita, Solomon Islands. The language spoken on the coast from Uru on the northeast to Langalanga, Alite Harbor, on the northwest of Big Malaita, is practically Lau. On the west coast there is considerable admixture of Fiu, which is the language of the bush behind the Langalanga lagoon. In Dr. Codrington's "Melanesian Languages," pp. 39 et seq., certain words are given as spoken at Alite in Langalanga. These words are probably Fiu rather than Lau.

The purest Lau is spoken at Sulufou, one of the artificial islets near Atta Cove. The inhabitants of Ai-lali, on the mainland of Big Malaita opposite the island Aio, are an offshoot of the Lau-speaking peoples. In Port Adam (Malau) on Little Malaita, some 12 miles north of Sa'a, there are two villages, Ramarama and Malede, inhabited by Lau-speaking peoples, and the inhabitants of these villages hold as a tradition that their forefathers migrated from Suraina, near Atta Cove, 80 miles away, along the coast to the north.

The Lau of this grammar and vocabulary was learned from dealings with the Port Adam natives and also from a stay of several weeks with Rev. A. I. Hopkins, at Mangoniia, on the mainland opposite the artificial islet Ferasubua.

It is not claimed that the Lau here presented is the same as the Lau of the northeast coast of Big Malaita. Doubtless owing to the Port Adam peoples being surrounded by Sa'a-speaking peoples, they have adopted Sa'a words and methods of speech to some extent. The women of the hill peoples above Port Adam have largely been procured as wives for the Port Adam men and thus there has been a tendency for the distinctiveness of the Lau language to disappear and for the Sa'a words to be adopted. While this tendency was perhaps not very great previous to the introduction of Christianity (for the village children always follow the language of the father rather than that of the mother), the teachers in the village schools, after Christianity was introduced, necessarily used the Sa'a books and, when translations were eventually made into Lau, words and phrases of Sa'a crept in. So far as lay in the power of the present author, he has endeavored to eliminate these Sa'a elements from the present work.

In the translations made into Lau, some use has been made of the gerundive, following the use in Sa'a; but until we have further evidence of the validity of this usage it must be regarded as not belonging to the genius of the Lau language, and it is therefore omitted here.

It will be seen that Lau is a typical Melanesian language and has few marked peculiarities. In Sa'a there is a distinctive use of the shortened forms of the pronouns of the first and second persons, au and 'o, suffixed to verbs and prepositions as object; in Lau the same shortening is not effected and the longer forms nau, oe, are used.

It has not been thought proper to represent any break in pronunciation such as occurs in Sa'a in such words, e. g., as ia fish, Sa'a i'e. Lau shows generally the dropping of such consonants as are dropped in Sa'a, but it is doubtful if the same break occurs in pronunciation.

The books already printed in Lau are:

The grammar here given is an alteration of the grammar prepared by the present writer, and printed at Norfolk Island by the Mission Press in 1914....