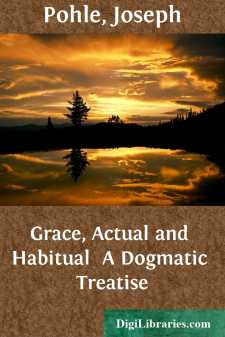 1. GENERAL NOTION OF GRACE.—The best way to arrive at a correct definition of actual grace is by the synthetic method. We therefore begin with the general notion of grace.

Like “nature,”(3) grace (gratia, χá½±ρις) is a word of wide reach, used in a great variety of senses. Habert(4) enumerates no less than fourteen; which, however, may be reduced to four.

a) Subjectively, grace signifies good will or benevolence shown by a superior to an inferior, as when a criminal is pardoned by the king’s grace.

b) Objectively, it designates a favor inspired by good will or benevolence. In this sense the term may be applied to any free and gratuitous gift (donum gratis datum), as when a king bestows graces on his lieges.

c) Grace may also mean personal charm or attractiveness. In this sense the term frequently occurs in Latin and Greek literature (the Three Graces). Charm elicits love and prompts a person to the bestowal of favors.

d) The recipient of gifts or favors usually feels gratitude towards the giver, which he expresses in the form of thanks. Hence the word gratiae (plural) frequently stands for thanksgiving (“gratias agere,” “Deo gratias,” “to say grace after meals”).(5)

The first and fundamental of these meanings is “a free gift or favor.” The benevolence of the giver and the attractiveness of the recipient are merely the reasons for which the gift is imparted, whereas the expression of thanks is an effect following its bestowal.

Dogmatic theology is concerned exclusively with grace in the fundamental sense of the term.

e) Grace is called a gift (donum, δωρεá½±), because it is owing to free benevolence, not required by justice. It is called gratuitous (gratis datum), because it is bestowed without any corresponding merit on the part of the creature. A gift may be due to the recipient as a matter of distributive or commutative justice, and in that case it would not be absolutely gratuitous (gratis). Grace, on the contrary, is bestowed out of pure benevolence, from no other motive than sheer love. This is manifestly St. Paul’s idea when he writes: “And if by grace, it is not now by works: otherwise grace is no more grace.”(6) It is likewise the meaning of St. Augustine when he says, in his Homilies on the Gospel of St. John, that grace is “something gratuitously given … as a present, not in return for something else.”(7)

2. NATURAL AND SUPERNATURAL GRACE.—Grace is not necessarily supernatural. Sacred Scripture and the Fathers sometimes apply the word to purely natural gifts. We petition God for our daily bread, for good health, fair weather and other temporal favors, and we thank Him for preserving us from pestilence, famine, and war, although these are blessings which do not transcend the order of nature.(8)

a) Our petitions for purely natural favors are inspired by the conviction that creation itself, and everything connected therewith, is a gratuitous gift of God. This conviction is well founded....