Government Documents in Small Libraries Reprinted from Report of Board of Library Commissioners of Ohio for the Year ending November 15, 1909. 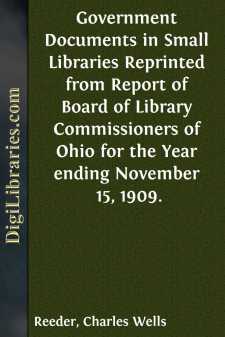 The problem of government publications in the small libraries has been discussed at much length by librarians, but it is still far from a definite solution. In fact, there can be no general settlement of many phases of this question, for each and every library must decide what its own policy and attitude shall be toward this class of publications.

It is generally admitted that some libraries ought to have all the publications that are made for distribution, and therefore a system of depository libraries is maintained by the government. The libraries which are not favored with this privilege are compelled to make a selection from the great number of documents and there is the essence of the problem for discussion here. The question of what to get involves the selection of certain publications which will be useful to present patrons of the library and the acquisition of those for which a demand can be created. For instance, if the library is located in a rural section, there will be a big demand for publications relating to agriculture, and a larger proportion of such documents will be secured than for other subjects. If the students of the high school are interested in debating present day questions, the publications of the government relating to the existing political and economic conditions will be in demand. In the final analysis, the librarian must feel the pulse of the community, as it were, and secure the classes of government material which correspond most nearly to the demand. At the same time, by making use of bibliographies, of department lists of publications and of the reference section in the Documents Office, the demand for this class of literature can be materially increased and documents secured which are not already in the library.

The purpose of this discussion is to suggest a list of government publications which will be of use in a small library. Before doing so, the various methods of securing documents must be mentioned, as the way will be indicated with each document serial in the following list. First of all, there is the system of depository distribution which is based on the act of January 12, 1895. The idea is to place in all sections of the country complete collections of all public documents which are printed and made for distribution. This privilege is granted by law or through the request of senators and representatives. The second way in which large numbers of documents are distributed is through the congressional quota. This practice is a very old one, being used for the first time in 1791. Each member of Congress is given a quota of all documents published by that body, the number varying with each document. These are distributed by the order of the congressmen and are sent out under their franks. As a rule, the libraries will receive very prompt and courteous attention from their representative in Congress to any request made for publications. Thirdly, the departments and bureaus have mailing lists including public officials, institutions of various kinds and interested people. Usually a request by a library to be placed upon such a list is granted; if not, a letter to the congressman will bring the desired result. Finally, the Superintendent of Documents is authorized to sell the government publications at a price sufficient to cover the actual expense of paper, press work and binding....