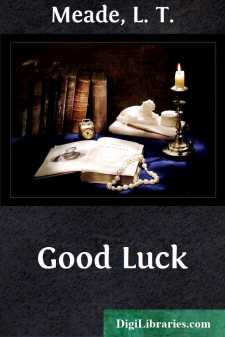 Amongst the crowd of people who were waiting in the Out-Patients' Department of the London Hospital on a certain foggy day toward the latter end of November might have been seen an old cherry-cheeked woman. She had bright blue eyes and firm, kindly lips. She was a little woman, slightly made, and her whole dress and appearance were somewhat old-fashioned. In the first place, she was wonderfully pretty. Her little face looked something like a russet apple, so clear was her complexion and so bright and true the light in her eyes. Her hair was snow-white, and rather fluffy in texture; it surrounded her forehead like a silver halo, adding to the picturesque effect of apple cheeks and deep blue eyes. Her attire was quaint and old-fashioned. She wore a neat black dress, made without the least attempt at ornament; round her neck was a snowy kerchief of somewhat coarse but perfectly clean muslin; over her shoulders a little black shawl was folded corner-ways, and pinned neatly with a large black-headed pin at her breast. A peep of the snowy handkerchief showed above the shawl; the handkerchief vied with the white of her hair. On her head was a drawn black silk bonnet with a tiny border of white net inside. Her hands were clothed in white cotton gloves. She stood on the borders of the crowd, one of them, and yet apart from them, noticeable to everyone present by her pretty, dainty neatness, and by the look of health which to all appearance she possessed. This had evidently been her first visit to the Out-Patients' Department. Some habitués of the place turned and stared at her, and one or two women who stood near—burdened, pallid, ill-looking women—gave her a quick glance of envy, and asked her with a certain show of curiosity what ailed her.

"It's my hand, dear," was the reply. "It pains awful—right up to the shoulder."

"It's rheumatis you've got, you poor thing," said one of the women who had addressed her.

"No, I don't think it's exactly that," was the reply; "but the doctor 'll tell. I can't hold my needle with the pain; it keeps me awake o' nights. Oh, we must all have our share," she added cheerfully; "but ef it were the will of the Almighty, I'd rayther not have my share o' pain in my right hand."

"You does needlework fer a living, I suppose?" said a man who stood near.

"Yes. I only 'opes to the Lord that my working hand isn't going to be taken from me—but there, I'll soon know."

She smiled brightly at these words, and addressed one of her neighbors with regard to the state of that neighbor's baby—the child was evidently suffering from ophthalmia, and could scarcely open its eyes.

It was cold in the out-patients' waiting-room, and the crowd became impatient and anxious, each for his or her turn to see the doctors who were in attendance. At last the little woman with the white hair was admitted to the consulting-room. She was shown in by a dresser, and found herself face to face with the doctor. He said a few words to her, asked her some questions with regard to her symptoms, looked at the hand, touched the thumb and forefinger, examined the palm of the hand very carefully, and then pronounced his brief verdict....