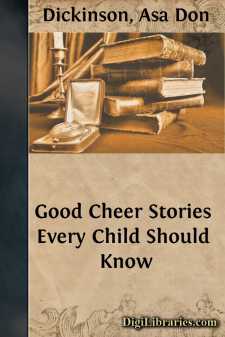 This fairy tale of a gormandizing people contains no mention of Thanksgiving Day. Yet its connection with our American festival is obvious. Every one who likes fairy tales will enjoy reading it.

he country of the Greedy, well known in history, was ruled by a king who had much trouble. His subjects were well behaved, but they had one sad fault: they were too fond of pies and tarts. It was as disagreeable to them to swallow a spoonful of soup as if it were so much sea water, and it would take a policeman to make them open their mouths for a bit of meat, either boiled or roasted. This deplorable taste made the fortunes of the pastry cooks, but also of the apothecaries. Families ruined themselves in pills and powders; camomile, rhubarb, and peppermint trebled in price, as well as other disagreeable remedies, such as castor —— which I will not name.

The King of the Greedy sought long for the means of correcting this fatal passion for sweets, but even the faculty were puzzled.

"Your Majesty," said the great court doctor, Olibriers, at his last audience, "your people look like putty! They are incurable; their senseless love for good eating will bring them all to the grave."

This view of things did not suit the King. He was wise, and saw very plainly that a monarch without subjects would be but a sorry king.

Happily, after this utter failure of the doctors, there came into the mind of His Majesty a first-class idea: he telegraphed for Mother Mitchel, the most celebrated of all pastry cooks. Mother Mitchel soon arrived, with her black cat, Fanfreluche, who accompanied her everywhere. He was an incomparable cat. He had not his equal as an adviser and a taster of tarts.

Mother Mitchel having respectfully inquired what she and her cat could do for His Majesty, the King demanded of the astonished pastry cook a tart as big as the capitol—bigger even, if possible, but no smaller! When the King uttered this astounding order, deep emotion was shown by the chamberlains, the pages, and lackeys. Nothing but the respect due to his presence prevented them from crying "Long live Your Majesty!" in his very ears. But the King had seen enough of the enthusiasm of the populace, and did not allow such sounds in the recesses of his palace.

The King gave Mother Mitchel one month to carry out his gigantic project. "It is enough," she proudly replied, brandishing her crutch. Then, taking leave of the King, she and her cat set out for their home.

On the way Mother Mitchel arranged in her head the plan of the monument which was to immortalize her, and considered the means of executing it. As to its form and size, it was to be as exact a copy of the capitol as possible, since the King had willed it; but its outside crust should have a beauty all its own. The dome must be adorned with sugarplums of all colours, and surmounted by a splendid crown of macaroons, spun sugar, chocolate, and candied fruits. It was no small affair.

Mother Mitchel did not like to lose her time. Her plan of battle once formed, she recruited on her way all the little pastry cooks of the country, as well as all the tiny six-year-olds who had a sincere love for the noble callings of scullion and apprentice....