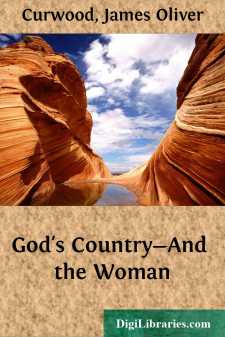 Philip Weyman's buoyancy of heart was in face of the fact that he had but recently looked upon Radisson's unpleasant death, and that he was still in a country where the water flowed north. He laughed and he sang. His heart bubbled over with cheer. He talked to himself frankly and without embarrassment, asked himself questions, answered them, discussed the beauties of nature and the possibilities of storm as if there were three or four of him instead of one.

At the top end of the world a man becomes a multiple being—if he is white. Two years along the rim of the Arctic had taught Philip the science by which a man may become acquainted with himself, and in moments like the present, when both his mental and physical spirits overflowed, he even went so far as to attempt poor Radisson's "La Belle Marie" in the Frenchman's heavy basso, something between a dog's sullen growl and the low rumble of distant thunder. It made him cough. And then he laughed again, scanning the narrowing sweep of the lake ahead of him.

He felt like a boy, and he chuckled as he thought of the definite reason for it. For twenty-three months he had been like a piece of rubber stretched to a tension—sometimes almost to the snapping point. Now had come the reaction, and he was going HOME. Home! It was that one word that caused a shadow to flit over his face, and only once or twice had he forgotten and let it slip between his lips. At least he was returning to civilization—getting AWAY from the everlasting drone of breaking ice and the clack-clack tongue of the Eskimo.

With the stub of a pencil Philip had figured out on a bit of paper about where he was that morning. The whalebone hut of his last Arctic camp was eight hundred miles due north. Fort Churchill, over on Hudson's Bay, was four hundred miles to the east, and Fort Resolution, on the Great Slave, was four hundred miles to the west. On his map he had drawn a heavy circle about Prince Albert, six hundred miles to the south. That was the nearest line of rail. Six days back Radisson had died after a mouth's struggle with that terrible thing they called "le mort rouge," or the Red Death. Since then Philip had pointed his canoe straight UP the Dubawnt waterways, and was a hundred and twenty miles nearer to civilization. He had been through these waterways twice before, and he knew that there was not a white man within a hundred and fifty miles of him. And as for a white woman—

Weyman stopped his paddling where there was no current, and leaned back in his canoe for a breathing space, and to fill his pipe. A WHITE WOMAN! Would he stare at her like a fool when he saw her again for the first time? Eighteen months ago he had seen a white woman over at Fort Churchill—the English clerk's wife, thirty, with a sprinkle of gray in her blond hair, and pale blue eyes. Fresh from the Garden of Eden, he had wondered why the half-dozen white men over there regarded her as they did. Long ago, in the maddening gloom of the Arctic night, he had learned to understand....