God and the World A Survey of Thought 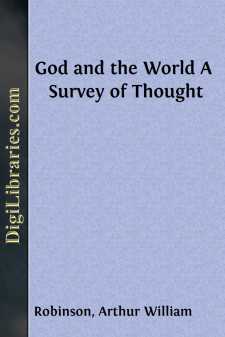 A man, so it has been said, is distinguished from the creatures beneath him by his power to ask a question. To which we may add that one man is distinguished from another by the kind of question that he asks. A man is to be measured by the size of his question. Small men ask small questions: of here and now; of to-day and to-morrow and the next day; of how they may quickest fill their pockets, or gain another step upon the social ladder. Great men are concerned with great questions: of life, of man, of history, of God.

So again, the size of an age can be determined by the size of its questions. It has been claimed that the age through which we have passed was a great age, and tried by this test we need not hesitate to admit the claim. It was full of questions, and they were great questions. As never before, the eyes of men strained upwards and backwards into the dim recesses of the past to discover something, if it might be, of the beginnings of things: of matter and life; of the earth and its contents; of the solar system and the universe. We know with what interest inquiries of this sort were regarded, and how ready the people were to read the books that dealt with them; to attend lectures and discussions about them, and to give their money for the purposes of such research. It was a great age that could devote itself so eagerly to questions of this importance and magnitude.

But as men cannot live upon appetite, so neither can they be for ever satisfied with questions. Hence it follows that a period of questioning is ordinarily followed by another, in which the accumulated information is sorted and digested and turned to practical account; a time in which constructive work is attempted, and some understanding is arrived at as to the relation that exists between the old knowledge and the new. It looks as if we were nearing such a time, when, for a while at all events, there will be a pause for reconsideration and reconstruction, and the human spirit will gather strength and confidence before again setting out upon its quest of the Infinite. Already we are asked to give attention to statements that are intended to review the whole situation and to summarise, provisionally at all events, the results that have been attained. Each of these attempts will, in its turn, be superseded by something that is wider in its outlook and wiser in its verdicts. This little book is an effort of this nature, and it is offered in the hope that it may serve some such useful and temporary purpose.

Much more competent writers than its author might well apologise for consenting to enter upon the task which he has been invited to undertake. All that he can say, by way of excuse for his boldness in complying, is that for many years he has endeavoured to follow the trend of modern thinking, and that the growing interest with which he has done this encourages him to hope that he may be able to make what he has to tell about it both intelligible and interesting to others. He does not imagine that he can escape mistakes, and he will most gladly submit himself to the correction of others who know better and see more clearly than he does....