God and my Neighbour 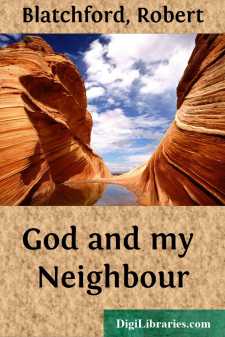 The name has been bestowed on me by several Christian gentlemen as a reproach, but to my ears it has a quaint and not unpleasing sound.

Infidel! "The notorious infidel editor of the Clarion" is the form used by one True Believer. The words recurred to my mind suddenly, while I was taking my favourite black pipe for a walk along "the pleasant Strand," and I felt a smile glimmer within as I repeated them.

Which is worse, to be a Demagogue or an Infidel? I am both. For while many professed Christians contrive to serve both God and Mammon, the depravity of my nature seems to forbid my serving either.

It was a mild day in mid-August, not cold for the time of year. I had been laid up for a few days, and my back was unpropitious, and I was tired. But I felt very happy, for so bad a man, since the sunshine was clear and genial, and my pipe went as easily as a dream.

Besides, one's fellow-creatures are so amusing: especially in the Strand. I had seen a proud and gorgeously upholstered lady lolling languidly in a motor car, and looking extremely pleased with herself—not without reason; and I had met two successful men of great presence, who reminded me somehow of "Porkin and Snob"; and I had noticed a droll little bundle of a baby, in a fawn-coloured woollen suit, with a belt slipped almost to her knees, and sweet round eyes as purple as pansies, who was hunting a rolling apple amongst "the wild mob's million feet"; and I had seen a worried-looking matron, frantically waving her umbrella to the driver of an omnibus, endanger the silk hat of Porkin and disturb the complacency of Snob; and I felt glad.

It was at that moment that there popped into my head the full style and title I had earned. "Notorious Infidel Editor of the Clarion!" These be brave words, indeed. For a moment they almost flattered me into the belief that I had become a member of the higher criminal classes: a bold bad man, like Guy Fawkes, or Kruger, or R. B. Cuninghame Graham.

"You ought," I said to myself, "to dress the part. You ought to have an S.D.P. sombrero, a slow wise Fabian smile, and the mysterious trousers of a Soho conspirator."

But at the instant I caught a sight of my counterfeit presentment in a shop window, and veiled my haughty crest. That a notorious Infidel! Behold a dumpy, comfortable British paterfamilias in a light flannel suit and a faded sun hat. No; it will not do. Not a bit like Mephisto: much more like the Miller of the Dee.

Such thoughts should make men humble. After all, may not even John Burns be human; may not Mr. Chamberlain himself have a heart that can feel for another?

Gentle reader, that was a wise as well as a charitable man who taught us there is honour among thieves; although, having never been a member of Parliament himself, he must have spoken from hearsay.

"For all that, Robert, you're a notorious Infidel." I paused—just opposite the Tivoli—and gazed moodily up and down the Strand....