Go Ahead Boys and the Racing Motorboat 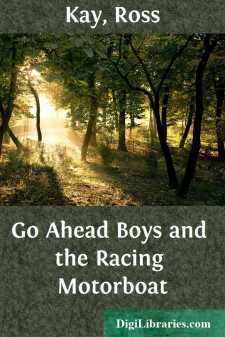 CHAPTER I THE START

"Look quick, or we'll be out of your sight."

The long, low motor-boat glided smoothly out from the dock to which it had been made fast. Behind it the water boiled as if it had been stirred by some invisible furnace. The graceful lines of the boat, its manifest power and speed, formed a fitting complement to the bright sunshine and clear air which rested over the waters of the Hudson River.

On the dock, which the Black Growler was leaving so rapidly behind her, were assembled various members of the families represented by the four boys on board the motor-boat. Younger brothers and sisters, two uncles, several aunts, not to mention the various fathers and mothers united in a final word of farewell. Handkerchiefs were waved and the sounds of the last faint call came across the intervening waters.

The Black Growler was leaving Yonkers to be gone more than a month. The trip was one to which the Go Ahead boys had looked forward with steadily increasing interest.

In the first place the boat belonged to Fred Button, one of the quartet. Fred now was at the wheel and the expression of pride on his face as he occasionally glanced behind him at his companions was one that indicated something of the feeling in his heart. And indeed there was a substantial basis for Fred's pride. Among the many boats on the river the Black Growler moved as if she belonged in a class of her own. People on board the cat boats or yachts, and even the passengers on a great passing steamer, all stood looking with manifest interest at the dark-colored little boat which was speeding over the waters almost like a thing alive.

Fred Button, the owner and present pilot of the swift motor-boat was the smallest, or at least the shortest, of the four boys. His age was the same as that of his companions, all of whom were about seventeen. His round body and rounder face were evidences that in time what Fred lacked in length he might provide in breadth. Among his companions he was a great favorite and frequently was called by one of the several nicknames which his comrades had bestowed upon him. Peewee or Pygmy, the latter sometimes shortened to Pyg, were names to which he answered almost as readily as to his Christian name.

His most intimate friend of the four was John Clemens, whose nickname, "String," indicated what his physique was. He was six feet three inches in height, although his weight was not much more than that of the more diminutive Fred. "The long and the short of it" the two boys sometimes were called when they were seen together.

Grant was the one member of the Go Ahead boys who easily led in whatever he attempted. His standing in school was high and his time in the hundred yards dash stood now as a school record. His fund of general information was so large that some years before, in a joke he had been dubbed Socrates. That expressive name, however, had recently been shortened to Soc.

George Washington Sanders, one of the most popular boys in his school, frequently was referred to as Pop, by which designation his friends indirectly expressed their admiration for one who, even if he bore the name of the Father of his Country, was laughingly referred to as the Papa of the Land....