Glimpses of Bengal Selected from the Letters of Sir Rabindranath Tagore 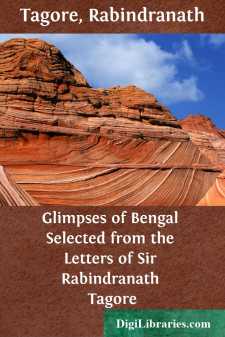 BANDORA, BY THE SEA,

The unsheltered sea heaves and heaves and blanches into foam. It sets me thinking of some tied-up monster straining at its bonds, in front of whose gaping jaws we build our homes on the shore and watch it lashing its tail. What immense strength, with waves swelling like the muscles of a giant!

From the beginning of creation there has been this feud between land and water: the dry earth slowly and silently adding to its domain and spreading a broader and broader lap for its children; the ocean receding step by step, heaving and sobbing and beating its breast in despair. Remember the sea was once sole monarch, utterly free.

Land rose from its womb, usurped its throne, and ever since the maddened old creature, with hoary crest of foam, wails and laments continually, like King Lear exposed to the fury of the elements.

I am in my twenty-seventh year. This event keeps thrusting itself before my mind—nothing else seems to have happened of late.

But to reach twenty-seven—is that a trifling thing?—to pass the meridian of the twenties on one's progress towards thirty?—thirty—that is to say maturity—the age at which people expect fruit rather than fresh foliage. But, alas, where is the promise of fruit? As I shake my head, it still feels brimful of luscious frivolity, with not a trace of philosophy.

Folk are beginning to complain: "Where is that which we expected of you—that in hope of which we admired the soft green of the shoot? Are we to put up with immaturity for ever? It is high time for us to know what we shall gain from you. We want an estimate of the proportion of oil which the blindfold, mill-turning, unbiased critic can squeeze out of you."

It has ceased to be possible to delude these people into waiting expectantly any longer. While I was under age they trustfully gave me credit; it is sad to disappoint them now that I am on the verge of thirty. But what am I to do? Words of wisdom will not come! I am utterly incompetent to provide things that may profit the multitude. Beyond a snatch of song, some tittle-tattle, a little merry fooling, I have been unable to advance. And as the result, those who held high hopes will turn their wrath on me; but did any one ever beg them to nurse these expectations?

Such are the thoughts which assail me since one fine Bysakh morning I awoke amidst fresh breeze and light, new leaf and flower, to find that I had stepped into my twenty-seventh year.

Our house-boat is moored to a sandbank on the farther side of the river. A vast expanse of sand stretches away out of sight on every side, with here and there a streak, as of water, running across, though sometimes what gleams like water is only sand.

Not a village, not a human being, not a tree, not a blade of grass—the only breaks in the monotonous whiteness are gaping cracks which in places show the layer of moist, black clay underneath.

Looking towards the East, there is endless blue above, endless white beneath....