Girls of the Forest 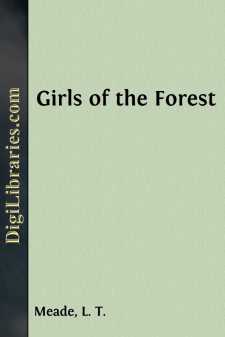 CHAPTER I. THE GUEST WHO WAS NEITHER OLD NOR YOUNG.

It was a beautiful summer’s afternoon, and the girls were seated in a circle on the lawn in front of the house. The house was an old Elizabethan mansion, which had been added to from time to time—fresh additions jutting out here and running up there. There were all sorts of unexpected nooks and corners to be found in the old house—a flight of stairs just where you did not look for any, and a baize door shutting away the world at the moment when you expected to behold a long vista into space. The house itself was most charming and inviting-looking; but it was also, beyond doubt, much neglected. The doors were nearly destitute of paint, and the papers on many of the walls had completely lost their original patterns. In many instances there were no papers, only discolored walls, which at one time had been gay with paint and rendered beautiful with pictures. The windows were destitute of curtains; the carpets on the floors were reduced to holes and patches. The old pictures in the picture gallery still remained, however, and looked down on the young girls who flitted about there on rainy days with kindly, or searching, or malevolent eyes as suited the characters of those men and women who were portrayed in them.

But this was the heart of summer, and there was no need to go into the musty, fusty old house. The girls sat on the grass and held consultation.

“She is certainly coming to-morrow,” said Verena. “Father had a letter this morning. I heard him giving directions to old John to have the trap patched up and the harness mended. And John is going to Lyndhurst Road to meet her. She will arrive just about this time. Isn’t it too awful?”

“Never mind, Renny,” said her second sister; “the sooner she comes, the sooner she’ll go. Briar and Patty and I have put our heads together, and we mean to let her see what we think of her and her interfering ways. The idea of Aunt Sophia interfering between father and us! Now, I should like to know who is likely to understand the education of a girl if her own father does not.”

“It is all because the Step has gone,” continued Verena. “She told us when she was leaving that she meant to write to Aunt Sophia. She was dreadfully cross at having to go, and the one mean thing she ever did in all her life was to make the remark she did. She said it was very little short of disgraceful to have ten girls running about the New Forest at their own sweet will, without any one to guide them.”

“Oh, what a nuisance the Step is!” said Rose, whose pet name was Briar. “Shouldn’t I like to scratch her! Dear old Paddy! of course he knows how to manage us. Oh, here he comes—the angel! Let’s plant him down in our midst. Daisy, put that little stool in the middle of the circle; the Padre shall sit there, and we’ll consult as to the advent of precious Aunt Sophia.”

Patty, Briar, and Verena now jumped to their feet and ran in the direction where an elderly gentleman, with a stoop, gray hair hanging over his shoulders, and a large pair of tortoise-shell spectacles on his nose, was walking....