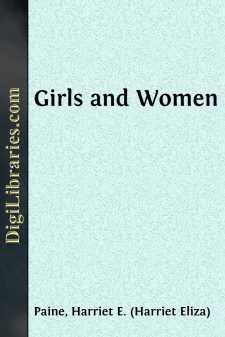 AN AIM IN LIFE.

For the sake of girls who are just beginning life, let me tell the stories of some other girls who are now middle-aged women. Some of them have succeeded and some have failed in their purposes, and often in a surprising way.

I remember a girl who left school at seventeen with the highest honors. Immediately we began to see her name in the best magazines. The heavy doors of literature seemed to swing open before her. Then suddenly we heard no more of her. A dozen years later she was known to no one outside her own circle. She was earning her living as book-keeper in a large five-cent store! She led the life of a drudge, and that was not the worst of it. She was a sensitive woman, and there was much that was mortifying in her position. All her Greek and Italian books were packed away. She knew no more of science than when she left school. At odd minutes she read good novels, and that was all she had to do with literature. Those who had expected much of her thought her life was a failure, and she thought so too.

Yet there is another side to the picture. The aim she had set for herself in life was not to be an author, though that idea had taken strong hold on her, and she tried to realize it in spite of great discouragements. This was her minor aim, but the grand aim with her had always been to lead the divine life at whatever cost. It proved to cost almost everything. Her utmost help was needed for her large family, which was poor. Unusual as her success with editors had been, no girl of seventeen could depend on a large income from magazines. A good salary was offered her as book-keeper, and she accepted it.

She tried to continue her favorite occupation by rising early, but she was not strong enough to go on long in that way. She sometimes had an hour in the evening, but when she saw the wistful look in her mother's face she would not shut herself up alone. At the rare times when she was still free to choose she went back to her books and her pen, but she could not do much, and at last she felt it would be better not to try. It was simply a source of vexation, and she needed a serene mind above all things.

The only way her life could open towards beauty or happiness at all was by putting the true spirit into her daily work. With a resolute heart she did this. No books were ever more beautifully kept than hers; every figure was clear and perfect; every column was added without a mistake. In short, she did her work like an artist.

To the sales-girls she was like a guardian angel. She might have written good stories all her life without helping others half so much. Little, weak, frivolous girls became strong, fine women simply from daily contact with her. She did not realize that. She only knew that she loved the girls and that they loved her. She did know that she helped her family—with her money. Her spirit helped them unconsciously still more.

When at last she gave up the minor aim of her life, and no longer tried to be learned or famous, she had her energies set free for many little things which had previously been crowded out....