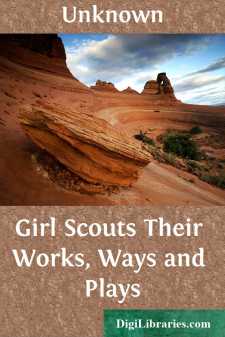 The Girl Scouts, a National organization, is open to any girl who expresses her desire to join and voluntarily accepts the Promise and the Laws. The object of the Girl Scouts is to bring to all girls the opportunity for group experience, outdoor life, and to learn through work, but more by play, to serve their community. Patterned after the Girl Guides of England, the sister organization of the Boy Scouts, the Girl Scouts has developed a method of self-government and a variety of activities that appear to be well suited to the desires of the girls as the 60,000 registered Scouts and the 5,000 new applicants each month testify.

The activities of the Girl Scouts may be grouped under five headings corresponding to five phases of women's life today:

I. The Home-maker. II. The Producer. III. The Consumer. IV. The Citizen. V. The Human Being.

I. Woman's most ancient way of service—the home-maker, the nurse, and the mother. The program provides incentives for practicing woman's world-old arts by requiring an elementary proficiency in cooking, housekeeping, first aid, and the rules of healthful living for any Girl Scout passing beyond the Tenderfoot stage. Of the forty odd subjects for which Proficiency Badges are given, more than one-fourth are in subjects directly related to the services of woman in the home, as mother, nurse or homekeeper. Into this work so often distasteful because solitary is brought the sense of comradeship. This is effected partly by having much of the actual training done in groups. Another element is the public recognition, and rewarding of skill in this, woman's most elementary service to the world, usually taken for granted and ignored.

The spirit of play infused into the simplest and most repetitious of household tasks banishes drudgery. "Give us, oh give us," says Carlyle, "a man who sings at his work. He will do more in the same time, he will do it better, he will persevere longer. Wondrous is the strength of cheerfulness; altogether past comprehension its power of endurance."

II. Woman, the producer. Handicrafts of many sorts enter into the program of the Girl Scouts. In camping girls must know how to set up tents, build lean-tos, and construct fire-places. They must also know how to make knots of various sorts to use for bandages, tying parcels, hitching, and so forth. Among the productive occupations in which Proficiency Badges are awarded are bee-keeping, dairying and general farming, gardening, weaving and needlework.

III. Woman, the consumer. One of the features in modern economics which is only beginning to be recognized is the fact that women form the consuming public. There are very few purchases, even for men's own use, which women do not have a hand in selecting. Practically the entire burden of household buying in all departments falls on the woman. In France this has long been recognized and the women of the middle classes are the buying partners and bookkeepers in their husbands' business....