Girl Scouts in the Adirondacks 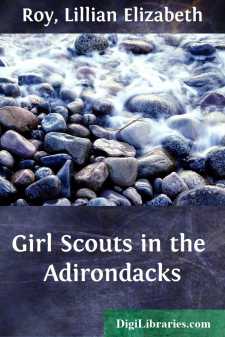 "Are we ready to start, girls?" called Mrs. Vernon, the Captain of Dandelion Troop of Girl Scouts, as she glanced at her protegées seated in two large touring cars.

"Ready! Why, Verny, we've been waiting for you these ten minutes," retorted Juliet Lee, one of the original members of the troop.

"And we're just crazy to be off before that black cloud overhead adds to mother's fear lest I never come home again," added Ruth Bentley, another of the first four girl scouts of Elmertown.

"Well, then, it seems that all the baggage and outfit we need with us on the trip is safely stowed away, eh, Jim?" said Mrs. Vernon, looking at the driver of the other car.

"Everything that I found waiting to be packed when I drove up to the side door," replied the chauffeur.

"All right! Then we're off, folkses, but we'll send you word the moment we arrive at Old Forge in the Adirondacks," called Mrs. Vernon, to the crowd of relatives of the various girls, all gathered to watch the scouts drive away.

Mrs. Vernon led the way in her luxurious automobile, and as they turned the bend of the road, where the last of the group still watching on the Vernon lawn was lost to sight, she laughingly remarked:

"I never thought a crowd of girls could get ready for such a long outing in so short a time."

"It all depends on how badly the girls want to be ready, Captain," retorted Joan Allison, the fourth girl of the number who founded Dandelion Camp of Girl Scouts the summer before.

"Say, girls! I just felt a drop of rain from that inky cloud!" Betty Lee warned. She was Julie's sister, and they were two who had first suggested a scout organization.

Mrs. Vernon slowed down and turned to the scouts. "Shall we stop to put on the rain-curtains?"

"Mercy, no! It's only a sprinkle, and we're not sugar," exclaimed Joan, glancing at the sky.

The other girls followed her gaze, and Julie said: "See all the blue sky! Enough to make the proverbial 'night-cap'."

In case the reader has not yet met the four girls who had such a thrilling time while at camp the previous summer, it will be best to make their acquaintance now.

As stated before, Juliet and Elizabeth Lee were the two sisters who planned having a scout troop for girls in Elmertown. Joan Allison and Ruth Bentley, both schoolmates of the Lee girls, eagerly agreed to add their efforts to the others' and secure the interest of enough girls for them to be able to apply for a charter from the Girl Scout Headquarters in New York City.

Before they closed their camp on "Verny's Mountain" that summer, five other girls had been admitted to membership in the young Patrol, namely: Hester Wynant, fourteen; Anne Bailey, fourteen; Judith Blake, thirteen; her sister, Edith Blake, twelve; and Amy Ward, thirteen.

Then during the winter, other girls who had heard of the good times the scouts had had in camp that past summer became so insistent to mothers at home that permission to join the organization was granted them....