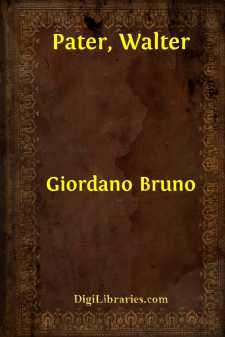 [234] IT was on the afternoon of the Feast of Pentecost that news of the death of Charles the Ninth went abroad promptly. To his successor the day became a sweet one, to be noted unmistakably by various pious and other observances; and it was on a Whit-Sunday afternoon that curious Parisians had the opportunity of listening to one who, as if with some intentional new version of the sacred event then commemorated, had a great deal to say concerning the Spirit; above all, of the freedom, the independence of its operation. The speaker, though understood to be a brother of the Order of St. Dominic, had not been present at the mass—the usual university mass, De Spiritu Sancto, said to-day according to the natural course of the season in the chapel of the Sorbonne, by the Italian Bishop of Paris. It was the reign of the Italians just then, a doubly refined, somewhat morbid, somewhat ash-coloured, Italy in France, more Italian still. Men of Italian birth, "to the great suspicion of simple people," swarmed in Paris, already "flightier, less constant, than the girouettes on its steeples," and it was love for Italian fashions that had brought king and courtiers here to-day, with great eclat, as they said, frizzed and starched, in the beautiful, minutely considered dress of the moment, pressing the university into a perhaps not unmerited background; for the promised speaker, about whom tongues had been busy, not only in the Latin quarter, had come from Italy. In an age in which all things about which Parisians much cared must be Italian there might be a hearing for Italian philosophy. Courtiers at least would understand Italian, and this speaker was rumoured to possess in perfection all the curious arts of his native language. And of all the kingly qualities of Henry's youth, the single one that had held by him was that gift of eloquence, which he was able also to value in others—inherited perhaps; for in all the contemporary and subsequent historic gossip about his mother, the two things certain are, that the hands credited with so much mysterious ill-doing were fine ones, and that she was an admirable speaker.

Bruno himself tells us, long after he had withdrawn himself from it, that the monastic life promotes the freedom of the intellect by its [235] silence and self-concentration. The prospect of such freedom sufficiently explains why a young man who, however well found in worldly and personal advantages, was conscious above all of great intellectual possessions, and of fastidious spirit also, with a remarkable distaste for the vulgar, should have espoused poverty, chastity, obedience, in a Dominican cloister. What liberty of mind may really come to in such places, what daring new departures it may suggest to the strictly monastic temper, is exemplified by the dubious and dangerous mysticism of men like John of Parma and Joachim of Flora, reputed author of the new "Everlasting Gospel," strange dreamers, in a world of sanctified rhetoric, of that later dispensation of the spirit, in which all law must have passed away; or again by a recognised tendency in the great rival Order of St. Francis, in the so-called "spiritual" Franciscans, to understand the dogmatic words of faith with a difference.

The three convents in which Bruno lived successively, at Naples, at Citta di Campagna, and finally the Minerva at Rome, developed freely, we may suppose, all the mystic qualities of a genius in which, from the first, a heady southern imagination took the lead. But it was from beyond conventional bounds he would look for the sustenance, the fuel, of an ardour born or bred within them. Amid such artificial religious stillness the air itself becomes generous in undertones. The vain young monk (vain of course!) would feed his vanity by puzzling the good, sleepy heads of the average sons of Dominic with his neology, putting new wine into old bottles, teaching them their own business—the new, higher, truer sense of the most familiar terms, the chapters they read, the hymns they sang, above all, as it happened, every word that referred to the Spirit, the reign of the Spirit, its excellent freedom. He would soon pass beyond the utmost limits of his brethren's sympathy, beyond the largest and freest interpretation those words would bear, to thoughts and words on an altogether different plane, of which the full scope was only to be felt in certain old pagan writers, though approached, perhaps, at first, as having a kind of natural, preparatory kinship with Scripture itself. The Dominicans would seem to have had well-stocked, liberally-selected, libraries; and this curious youth, in that age of restored letters, read eagerly, easily, and very soon came to the kernel of a difficult old author—Plotinus or Plato; to the purpose of thinkers older still, surviving by glimpses only in the books of others—Empedocles, Pythagoras, who had enjoyed the original divine sense of things, above all, Parmenides, that most ancient assertor of God's identity with the world. The affinities, the unity, of the visible and the invisible, of earth and heaven, of all things whatever, with each other, through the consciousness, the person, of God the Spirit, who was at every moment of infinite time, in every atom of matter, at every [236] point of infinite space, ay!...