Gil the Gunner The Youngest Officer in the East 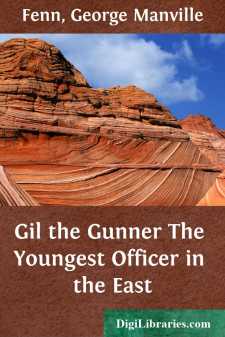 “Cut it, then, you miserable humbug. Take that.” Crack—thud!

My fist went home on Morton’s cheek, and almost simultaneously his flew out and struck me in the ribs. Crack—thud! Morton’s return sounding like an echo of my blow.

There was a buzz of excitement. Coats flew off; two of our fellows eagerly pressed forward to act as seconds; my shirt-sleeves were rolled up over my thin arms, and in another instant we two fellow-pupils were squaring at each other, and I was gathering myself up to deliver as hard a blow as I could when—

“Stop! halt!” came in a sharp harsh voice, and General Crucie, with the great scar upon his white forehead looking red and inflamed as it always did when he was angry, strode up, thumped down his thick malacca cane, so that the ferule went into the grass and it stood alone, while he looked from one to the other fiercely.

“Upon my word!” he cried. “Very pretty! Two gentlemen flying at each others’ throats like a couple of street boys. A regular blackguardly fight. I’m ashamed of you, gentlemen. What does it all mean?”

“Well, sir, it was like this,” began Hendry, my second.

“Silence, sir! I will not hear a word. I pretty well know what it all means. You, Vincent, as usual; that nasty overbearing temper of yours again. Is it utterly impossible for you to live in unity with your fellow-students?”

“No, sir; not if they would let me be, and not fasten quarrels on me,” I cried in an ill-used tone.

“Stuff, sir! rubbish, sir! nonsense, sir!” cried the general. “I know you better than you know yourself; and, mark my words, you will never succeed in your profession until you learn to behave like a gentleman. How can you expect to command men if you cannot command yourself. There, I’ll hear no more, for I’m sure you have been in the wrong.”

The general pointed in so unmistakable a manner that I walked off with my uniform jacket half on, slowly thrusting my arm into the vacant sleeve, and thinking bitterly, with my head bent and my forehead wrinkled up like that of an old man.

I was not long in reaching my little room, a favourite one amongst our fellows; and as I shut myself in, and locked the door, my conscience reproached me with certain passages in the past which led to my having that room, when a fellow-student gave way in my favour, and I don’t think it was from kindly feeling towards me.

“I’m a miserable, unhappy wretch,” I said, as I threw myself in a chair which resented the rough usage by creaking violently and threatening to break one leg. “Nobody likes me. I’m always getting into trouble, and every one will be glad when I am gone to Calcutta, Madras, or Bombay.”

I sat scowling down at the floor, thinking of how the others made friends and were regular companions, while I was almost avoided—at any rate, not sought out.

“Is it all my fault?” I thought; and that day I had a very long think as I wondered why I was so different from other fellows of my age....