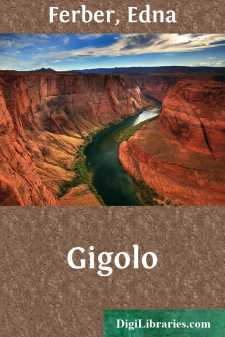 GIGOLO THE AFTERNOON OF A FAUN

Though he rarely heeded its summons—cagy boy that he was—the telephone rang oftenest for Nick. Because of the many native noises of the place, the telephone had a special bell that was a combination buzz and ring. It sounded above the roar of outgoing cars, the splash of the hose, the sputter and hum of the electric battery in the rear. Nick heard it, unheeding. A voice—Smitty's or Mike's or Elmer's—answering its call. Then, echoing through the grey, vaulted spaces of the big garage: "Nick! Oh, Ni-ick!"

From the other side of the great cement-floored enclosure, or in muffled tones from beneath a car: "Whatcha want?"

The obliging voice again, dutifully repeating the message: "He ain't in.... Well, it's hard to say. He might be in in a couple hours and then again he might not be back till late. I guess he's went to Hammond on a job——" (Warming to his task now.) "Say, won't I do?... Who's fresh! Aw, say, lady!"

You'd think, after repeated rebuffs of this sort, she could not possibly be so lacking in decent pride as to leave her name for Smitty or Mike or Elmer to bandy about. But she invariably did, baffled by Nick's elusiveness. She was likely to be any one of a number. Miss Bauers phoned: Will you tell him, please? (A nasal voice, and haughty, with the hauteur that seeks to conceal secret fright.) Tell him it's important. Miss Ahearn phoned: Will you tell him, please? Just say Miss Ahearn. A-h-e-a-r-n. Miss Olson: Just Gertie. But oftenest Miss Bauers.

Cupid's messenger, wearing grease-grimed overalls and the fatuous grin of the dalliant male, would transmit his communication to the uneager Nick.

"'S wonder you wouldn't answer the phone once yourself. Says you was to call Miss Bauers any time you come in between one and six at Hyde Park—wait a min't'—yeh—Hyde Park 6079, and any time after six at——"

"Well, how the hell should I know! Says call Miss Bauers any time between one and six at Hyde Park 6——"

Which explains why the calls came oftenest for Nick. He was so indifferent to them. You pictured the patient and persistent Miss Bauers, or the oxlike Miss Olson, or Miss Ahearn, or just Gertie hovering within hearing distance of the telephone listening, listening—while one o'clock deepened to six—for the call that never came; plucking up fresh courage at six until six o'clock dragged on to bedtime. When next they met: "I bet you was there all the time. Pity you wouldn't answer a call when a person leaves their name. You could of give me a ring. I bet you was there all the time."

Bewildered, she tried to retaliate with the boomerang of vituperation.

How could she know? How could she know that this slim, slick young garage mechanic was a woodland creature in disguise—a satyr in store clothes—a wild thing who perversely preferred to do his own pursuing? How could Miss Bauers know—she who cashiered in the Green Front Grocery and Market on Fifty-third Street?...