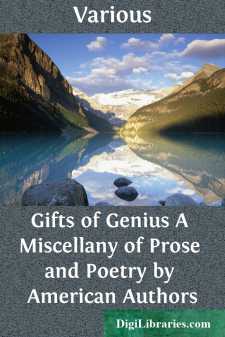 This volume speaks so well for itself that it does not need many words of preface to commend it to a wide circle of readers. Its rich and varied contents, however, become far more interesting when interpreted by the motive that won them from their authors; and when the kindly feeling that offered them so freely is known, these gifts, like the pearls of a rosary, will be prized not only severally but collectively, because strung together by a sacred thread.

The story of this undertaking is a very short and simple one. Miss Davenport, who had been for many years an active and successful teacher in our schools and families, especially in the beautiful arts of drawing and painting, was prostrated by a severe illness, which impaired her sight and finally terminated in blindness.

The late Benjamin F. Butler, in a letter dated October 13, 1858, which will have peculiar interest to the many readers who knew and honored that excellent man, writes thus:

"Miss Davenport has for several years been personally known to me. She is now blind and unable to follow the calling by which, before this calamity befell her, she obtained her living. Having lost her parents in early life, and having few relatives, and none able to assist her, she is dependent for her support on such efforts as she is still capable of making. These, were she a person of common fortitude, energy and hopefulness, would be very small, for to her great privation is added very imperfect general health. Yet she has struggled on in the hope of gaining such a competency as should ultimately secure 'a home that she may call her own.' I commend Miss Davenport to all who feel for the afflicted and who wish to do good."

The Rev. Dr. S. Storrs writes: "Miss Davenport is a Christian woman, of great excellence of character, and of many accomplishments, whom God in his providence has made totally blind within a few years past."

The volume is one of the many proofs which have been gathering for years, of the alliance between literature and humanity. Every good and true word that has been written from the beginning has been a minister of mercy to every human heart which it has reached, whilst the mercy has been twice blessed when the word so benign in its result has been charitable in its intention, and the author at once yields his profits to a friend's need, and his production to the public eye. Thackeray has written well upon humor and charity, but should he undertake to carry out his idea and treat of literature and humanity in their vital relations, he would have his hands and heart full of work for more than a lifetime. Princes who give their gold to generous uses are worthy of honor; but there is a coinage of the brain that costs more and weighs more than gold. The authors of these papers would of course be little disposed to claim any high merit for their offerings, yet any reader who runs his eye over the list of contributors will see at once that they are generally writers whose compositions are eagerly sought for by the public, and among them are some names whose pens can coin gold whenever they choose to move. All these articles are original, and nothing is inserted in this book that has been before published. We are confident that it deserves, and will command wide and choice circulation.

A word as to the lady for whose benefit these gifts are brought together. The preface of Mr. Bryant and the letter of Mr. Butler, tell her story with sufficient distinctness, and the readiness with which our men and women of letters have so generally complied with her request, shows what eloquence she bears in her presence and statement. Some certificates from her pupils in drawing, who testify to her love of nature and her delight in sketching directly from nature, so greatly to their improvement in this beautiful art, give peculiar pathos to her case. The organ that was the source of her highest satisfaction is closed up by this dark sorrow, and the gate called Beautiful, to this earthly temple no longer is open to scenes and faces of loveliness....