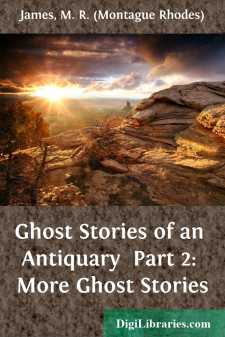 Two men in a smoking-room were talking of their private-school days. 'At our school,' said A., 'we had a ghost's footmark on the staircase. What was it like? Oh, very unconvincing. Just the shape of a shoe, with a square toe, if I remember right. The staircase was a stone one. I never heard any story about the thing. That seems odd, when you come to think of it. Why didn't somebody invent one, I wonder?'

'You never can tell with little boys. They have a mythology of their own.There's a subject for you, by the way—"The Folklore of PrivateSchools".'

'Yes; the crop is rather scanty, though. I imagine, if you were to investigate the cycle of ghost stories, for instance, which the boys at private schools tell each other, they would all turn out to be highly-compressed versions of stories out of books.'

'Nowadays the Strand and Pearson's, and so on, would be extensively drawn upon.'

'No doubt: they weren't born or thought of in my time. Let's see. I wonder if I can remember the staple ones that I was told. First, there was the house with a room in which a series of people insisted on passing a night; and each of them in the morning was found kneeling in a corner, and had just time to say, "I've seen it," and died.'

'Wasn't that the house in Berkeley Square?'

'I dare say it was. Then there was the man who heard a noise in the passage at night, opened his door, and saw someone crawling towards him on all fours with his eye hanging out on his cheek. There was besides, let me think—Yes! the room where a man was found dead in bed with a horseshoe mark on his forehead, and the floor under the bed was covered with marks of horseshoes also; I don't know why. Also there was the lady who, on locking her bedroom door in a strange house, heard a thin voice among the bed-curtains say, "Now we're shut in for the night." None of those had any explanation or sequel. I wonder if they go on still, those stories.'

'Oh, likely enough—with additions from the magazines, as I said. You never heard, did you, of a real ghost at a private school? I thought not; nobody has that ever I came across.'

'From the way in which you said that, I gather that you have.'

'I really don't know; but this is what was in my mind. It happened at my private school thirty odd years ago, and I haven't any explanation of it.

'The school I mean was near London. It was established in a large and fairly old house—a great white building with very fine grounds about it; there were large cedars in the garden, as there are in so many of the older gardens in the Thames valley, and ancient elms in the three or four fields which we used for our games. I think probably it was quite an attractive place, but boys seldom allow that their schools possess any tolerable features.

'I came to the school in a September, soon after the year 1870; and among the boys who arrived on the same day was one whom I took to: a Highland boy, whom I will call McLeod. I needn't spend time in describing him: the main thing is that I got to know him very well....