Getting Acquainted with the Trees 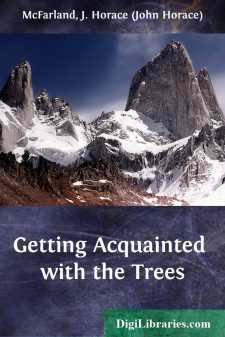 A Story of Some Maples

This is not a botanical disquisition; it is not a complete account of all the members of the important tree family of maples. I am not a botanist, nor a true scientific observer, but only a plain tree-lover, and I have been watching some trees bloom and bud and grow and fruit for a few years, using a camera now and then to record what I see—and much more than I see, usually!

In the sweet springtime, when the rising of the sap incites some to poetry, some to making maple sugar, and some to watching for the first flowers, it is well to look at a few tree-blooms, and to consider the possibilities and the pleasures of a peaceful hunt that can be made with profit in city street or park, as well as along country roadsides and in the meadows and the woods.

Who does not know of the maples that are all around us? Yet who has seen the commonest of them bloom in very early spring, or watched the course of the peculiar winged seed-pods or "keys" that follow the flowers? The white or "silver" maple of streets or roadsides, the soft maple of the woods, is one of the most familiar of American trees. Its rapid and vigorous growth endears it to the man who is in a hurry for shade, and its sturdy limbs are the joy of the tree-butcher who "trims" them short in later years.

Watch this maple in very early spring—even before spring is any more than a calendar probability—and a singular bloom will be found along the slender twigs. Like little loose-haired brushes these flowers are, coming often bravely in sleet and snow, and seemingly able to "set" and fertilize regardless of the weather. They hurry through the bloom-time, as they must do to carry out the life-round, for the graceful two-winged seeds that follow them are picked up and whirled about by April winds, and, if they lodge in the warming earth, are fully able to grow into fine little trees the same season. Examine these seed-pods, keys, or samaras (this last is a scientific name with such euphony to it that it might well become common!), and notice the delicate veining in the translucent wings. See the graceful lines of the whole thing, and realize what an abundant provision Dame Nature makes for reproduction,—for a moderate-sized tree completes many thousands of these finely formed, greenish yellow, winged samaras, and casts them loose for the wind to distribute during enough days to secure the best chances of the season.

This same silver maple is a bone of contention among tree-men, at times. Some will tell you it is "coarse"; and so it is when planted in an improper place upon a narrow street, allowed to flourish unrestrained for years, and then ruthlessly cropped off to a headless trunk! But set it on a broad lawn, or upon a roadside with generous room, and its noble stature and grace need yield nothing to the most artistic elm of New England. And in the deep woods it sometimes reaches a majesty and a dignity that compel admiration. The great maple at Eagles Mere is the king of the bit of primeval forest yet remaining to that mountain rest spot. It towers high over mature hemlocks and beeches, and seems well able to defy future centuries.

But there is another very early maple to watch for, and it is one widely distributed in the Eastern States. The red or scarlet maple is well named, for its flowers, not any more conspicuous in form than those of its close relation, the silver maple, are usually bright red or yellow, and they give a joyous color note in the very beginning of spring's overture. Not long are these flowers with us; they fade, only to be quickly succeeded by even more brilliant samaras, a little more delicate and refined than those of the silver maple, as well as of the richest and warmest hue. Particularly in New England does this maple provide a notable spring color showing.