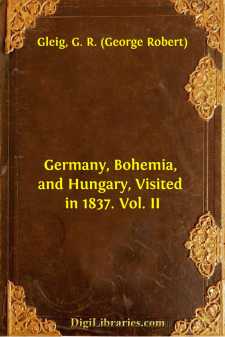 THE GULDEN KRONE. COUNT THUN'S CASTLE AND GROUNDS. GLORIOUS SCENERY. THE MARCH RESUMED. SUPERSTITIONS OF THE BOHEMIANS NOT IDOLATRY. STATE OF PROPERTY. OF THE AGRICULTURAL POPULATION. KAMNITZ. THE COW-HERDS. STEIN JENA. HAYDE.

We had quitted home not unprepared for the suspicious looks which innkeepers might be expected to cast upon us, strangely equipped as we were, rude of speech, and so very humble in the style of our travel. We were, therefore, nothing daunted by the somewhat cold reception which our host of the Golden Crown vouchsafed; and boldly questioned him relative to his means of supplying our wants, namely, supper, a bottle of wine, and a good bed-room. The confidence of our tone seemed to restore his; for he forthwith conducted us upstairs; and we were ushered into a snug little apartment, in which stood two beds, a table, a chest of drawers, and four or five chairs. This was all, in the way of lodging, of which we were desirous; and the next point to be settled was supper. What could they produce? Had they any mutton? No. Beef? None. Poultry? Nothing of the sort. What then? Veal, or, as it is elegantly termed, calf's-flesh, which could be served up within the space of an hour and a-half, either gokocht,—that is, boiled, or grebraten,—i.e., roasted. And here let me observe once for all, that he whose taste or whose stomach cannot be satisfied with veal, had better not travel in Germany. For veal is to the Germans what beef is to us,—the everyday diet of such as devour animal food at all; whereas beef they seem to use only at large hotels as materials for soup-making, while mutton is a luxury. Neither is it difficult to account for this. There are no extensive pasturages, even in the mountain districts of Germany, as there are in the Highlands of Scotland, and in the fens of Lincolnshire and Kent. Wherever the land has been cleared of wood, it is laid under the plough; wherever the wood continues, the utmost care is taken to prevent cattle and sheep from breaking in, and so destroying what is the principal fuel of the country. The consequence is, that people cannot afford to rear more cattle than is absolutely necessary for working the land, and supplying the dairies,—nor, indeed, if they could afford it, would the means of doing so be attainable. Hence the poor little calves, while yet in that state of innocence which entitles them among the Irish to the generic appellation of staggering bobs, are in nine cases out of ten transferred to the butcher, whose stall, if it contain nothing else, is sure to furnish an abundant supply of dead animals, which you might easily mistake for cats that have perished by atrophy.

Being fully aware of these important particulars, we expressed neither surprise nor regret when the solemn announcement was made to us, that we might have roasted veal for supper; but having ordered it to be prepared, together with an eyer-kuchen, or egg-souffle, as a supporter, we set about changing our attire preparatory to a ramble through the town....