Germany and the Next War 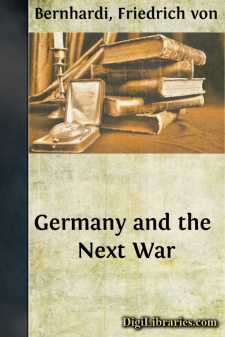 CHAPTER I THE RIGHT TO MAKE WAR

Since 1795, when Immanuel Kant published in his old age his treatise on "Perpetual Peace," many have considered it an established fact that war is the destruction of all good and the origin of all evil. In spite of all that history teaches, no conviction is felt that the struggle between nations is inevitable, and the growth of civilization is credited with a power to which war must yield. But, undisturbed by such human theories and the change of times, war has again and again marched from country to country with the clash of arms, and has proved its destructive as well as creative and purifying power. It has not succeeded in teaching mankind what its real nature is. Long periods of war, far from convincing men of the necessity of war, have, on the contrary, always revived the wish to exclude war, where possible, from the political intercourse of nations.

This wish and this hope are widely disseminated even to-day. The maintenance of peace is lauded as the only goal at which statesmanship should aim. This unqualified desire for peace has obtained in our days a quite peculiar power over men's spirits. This aspiration finds its public expression in peace leagues and peace congresses; the Press of every country and of every party opens its columns to it. The current in this direction is, indeed, so strong that the majority of Governments profess—outwardly, at any rate—that the necessity of maintaining peace is the real aim of their policy; while when a war breaks out the aggressor is universally stigmatized, and all Governments exert themselves, partly in reality, partly in pretence, to extinguish the conflagration.

Pacific ideals, to be sure, are seldom the real motive of their action. They usually employ the need of peace as a cloak under which to promote their own political aims. This was the real position of affairs at the Hague Congresses, and this is also the meaning of the action of the United States of America, who in recent times have earnestly tried to conclude treaties for the establishment of Arbitration Courts, first and foremost with England, but also with Japan, France, and Germany. No practical results, it must be said, have so far been achieved.

We can hardly assume that a real love of peace prompts these efforts. This is shown by the fact that precisely those Powers which, as the weaker, are exposed to aggression, and therefore were in the greatest need of international protection, have been completely passed over in the American proposals for Arbitration Courts. It must consequently be assumed that very matter-of-fact political motives led the Americans, with their commercial instincts, to take such steps, and induced "perfidious Albion" to accede to the proposals. We may suppose that England intended to protect her rear in event of a war with Germany, but that America wished to have a free hand in order to follow her policy of sovereignty in Central America without hindrance, and to carry out her plans regarding the Panama Canal in the exclusive interests of America....