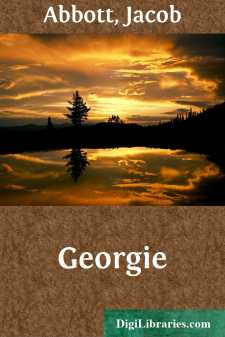 A short distance from where Rollo lives, there is a small, but very pleasant house, just under the hill, where you go down to the stone bridge leading over the brook. There is a noble large apple tree on one side of the house, which bears a beautiful, sweet, and mellow kind of apple, called golden pippins. A great many other trees and flowers are around the house, and in the little garden on the side of it towards the brook. There is a small white gate that leads to the house, from the road; and there is a pleasant path leading right out from the front door, through the garden, down to the water. This is the house that Georgie lives in.

One evening, just before sunset, Rollo was coming along over the stone bridge, towards home. He stopped a moment to look over the railing, down into the water Presently he heard a very sweet-toned voice calling out to him,

Rollo looked along in the direction in which the sound came. It was from the bank of the stream, a little way from the road, at the place where the path from Georgie's house came down to the water. The brook was broad, and the water pretty smooth and still here; and it was a place where Rollo had often been to sail boats with Georgie. There was a little smooth, sandy place on the shore, at the foot of the path, and they used to call it Georgie's landing; and there was a seat close by, under the bushes.

Rollo thought it was Georgie's voice that called him, and in a minute, he saw him sitting on his little seat, with his crutches by his side. Georgie was a sick boy. He could not walk, but had to sit almost all day, at home, in a large easy chair, which his father had bought for him. In the winter, his chair was established in a particular corner, by the side of the fire, and he had a little case of shelves and drawers, painted green, by the side of him. In these shelves and drawers he had his books and playthings,—his pen and ink,—his paint-box, brushes and pencils,—his knife, and a little saw,—and a great many things which he used to make for his amusement. Then, in the summer, his chair, and his shelves and drawers, were moved to the end window, which looked out upon the garden and brook. Sometimes, when he was better than usual, he could move about a little upon crutches; and, at such times, when it was pleasant, he used to go out into the garden, and down, through it, to his landing, at the brook.

Georgie had been sick a great many years, and when Rollo and Jonas first knew him, he used to be very sad and unhappy. It was because the poor little fellow had nothing to do. His father had to work pretty hard to get food and clothing for his family; he loved little Georgie very much, but he could not buy him many things. Sometimes people who visited him, used to give him playthings, and they would amuse him a little while, but he soon grew tired of them, and had them put away. It is very hard for any body to be happy who has not any thing to do.

It was Jonas that taught Georgie what to do. He lent him his knife, and brought him some smooth, soft, pine wood, and taught him to make wind-mills and little boxes. Georgie liked this very much, and used to sit by his window in the summer mornings, and make playthings, hours at a time. After he had made several things, Jonas told the boys that lived about there, that they had better buy them of him, when they had a few cents to spend for toys; and they did. In fact, they liked the little windmills, and wagons, and small framed houses that Georgie made, better than sugar-plums and candy. Besides, they liked to go and see Georgie; for, whenever they went to buy any thing of him, he looked so contented and happy, sitting in his easy chair, with his small and slender feet drawn up under him, and his work on the table by his side....