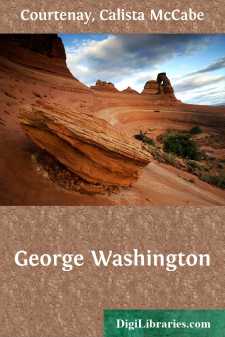 The twenty-second day of February is a national holiday in America because, as everybody knows, it is the anniversary of George Washington's birthday. All loyal Americans love and honor him, the greatest man in the history of the Republic.

He was born in 1732, in Westmoreland County, Virginia, where the Potomac River flowed past his father's farm. The farm-house, called "Wakefield," was burned, but the United States Government built a monument to mark the place where it stood.

When "Wakefield" was destroyed, the family lived for a time in a home, later called Mount Vernon, in Fairfax County. But the real boyhood home of George Washington was a farm overlooking the Rappahannock River, where his parents went when he was about eight years old. His father, Augustine Washington, was a prosperous Virginia planter, and owned several fine estates.

His mother's name was Mary Ball. She was a beautiful and sensible woman, and a wise, firm and loving mother. She was his father's second wife and there were two little lads already in the home, Lawrence and Augustine, when she came to take the place of their mother who had died. Besides these two half-brothers, George had two sisters and three brothers. The two older sons were sent to England to school.

When George was eight years old, Lawrence returned home, having finished his studies. A great affection at once sprang up between them. George was a fine, manly little fellow whom any big brother could love, and he looked up to Lawrence as a model. Before long, Lawrence went away to the wars, serving under Admiral Vernon in the West Indies. His letters filled George with admiration and he at once became commander-in-chief of all the boys at school; they had parades and battles in imitation of those Lawrence wrote about.

George's father died when he was twelve years old, but, fortunately, he had a wise and careful mother. She taught him respect and obedience to authority; justice and courtesy to others; loyalty to God and his country. He had a high temper and a spirit of command, which she taught him to control. A few times only in his life, when greatly provoked, did his anger get beyond bounds. He loved and honored his mother deeply and never forgot her teachings.

George and his younger brothers were educated in the country schools of Virginia. George soon showed that he had a practical mind, caring little for poetry and literature. He liked mathematics and wanted to know about business and keeping accounts. He spent hours copying into a book the exact forms of legal papers of all kinds. He was very neat and accurate in his school work and learned the value of system and order. He never began a thing without finishing it. He never did anything without knowing the reason why. When he grew up, these fine principles and this skill and accuracy, fitted him to take a great part in the history of America.

All boys in those early days knew how to handle guns and manage horses. George was an expert rider and loved the life of the woods. Being exceptionally tall and strong, he was the champion athlete at school. It is said he could throw a stone farther than any man in Virginia. Besides, he was so fair-minded that the boys always let him settle their disputes and quarrels, knowing he would give every one a square deal. He was the admired and trusted leader of them all.

In addition to his mother's care, George soon had the loving advice and devoted friendship of his brother Lawrence. The war was over and that splendid young gentleman had come home, and had married the charming Anne Fairfax....