George Selwyn: His Letters and His Life 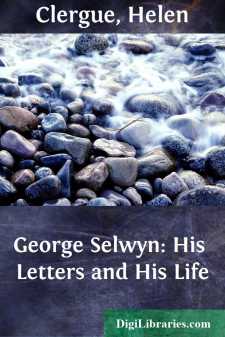 CHAPTER 1. GEORGE SELWYN—HIS LIFE, HIS FRIENDS, AND HIS AGE

During the latter half of the eighteenth century no man had more friends in the select society which comprised those who were of the first importance in English politics, fashion, or sport, than George Selwyn. In one particular he was regarded as supreme and unapproachable; he was the humourist of his time. His ban mots were collected and repeated with extraordinary zest. They were enjoyed by Members of Parliament at Westminster, and by fashionable ladies in the drawing-rooms of St. James's. They were told as things not to be forgotten in the letters of harassed politicians. "You must have heard all the particulars of the Duke of Northumberland's entertainment," wrote Mr. Whateley in 1768 to George Grenville, the most hardworking of ministers; "perhaps you have not heard George Selwyn's bon mot."* But as usually happens when a man becomes known for his humour jokes were fathered on Selwyn, just as half a century later any number of witticisms were attributed to Sydney Smith which he had never uttered. It was truly remarked of Selwyn at the time of his death: "Many good things he did say, there was no doubt, and many he was capable of saying, but the number of good, bad, and indifferent things attributed to him as bon mots for the last thirty years of his life were sufficient to stock a foundling hospital for wit."*

It is therefore not surprising that Selwyn has been handed down to posterity as a wit. It is a dismal reputation. Jokes collected in contemporary memoirs fall flat after a century's keeping; the essential of their success is spontaneity, appropriateness, the appreciation even of their teller, often also a knowledge among those who hear them of the peculiarities of the persons whom they mock. When we read one of them now, we are almost inclined to wonder how such a reputation for humour could be gained. Wit is of the present; preserved for posterity it is as uninteresting as a faded flower, nor can it recall to us memories sunny or sad. But Selwyn was a man who while filling a conspicuous place in the fashionable life of the age was also so intimate with statesmen and politicians, and so thoroughly lives in his correspondence, that in following his life we find ourselves one of that singular society which in the last half of the eighteenth century ruled the British Empire from St. James's Street.

Selwyn's life, though passed in a momentous age, was uneventful, but the course of it must be traced.

George Augustus Selwyn, second son of Colonel John Selwyn, of Matson, in Gloucestershire, and of Mary, daughter of General Farrington, of Kent, was born on the 11th of August, 1719. His father, aide-de-camp to Marlborough and a friend of Sir Robert Walpole, was a man of character and ability, well known in the courts of the first and second Georges. Selwyn, however, probably inherited his wit and his enjoyment of society from his mother, who was Woman of the Bedchamber to Queen Charlotte....