Geographic Variation in the Harvest Mouse, Reithrodontomys megalotis, On the Central Great Plains And in Adjacent Regions 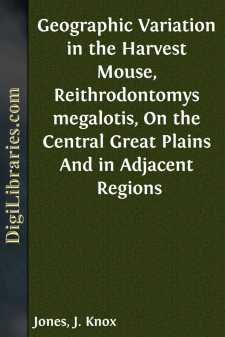 The western harvest mouse, Reithrodontomys megalotis, inhabits most parts of the central Great Plains and adjacent regions of tall grass prairie to the eastward, shows a marked predilection for grassy habitats, is common in many areas, and is notably less variable geographically than most other cricetids found in the same region. R. megalotis occurs (see Hall and Kelson, 1959:586, map 342) from Minnesota, southwestern Wisconsin, northwestern Illinois, Iowa and Missouri westward to, but apparently not across, the Rocky Mountains from southeastern Alberta to Colorado; it is known in Oklahoma only from the Panhandle, thence southward through the Panhandle and Trans-Pecos areas of Texas to southern México, westward across the mountains in New Mexico to the Pacific Coast, and northward to the west of the Rockies to southern British Columbia.

Hoffmeister and Warnock (1955) studied western harvest mice from Illinois, Iowa, northeastern Kansas, Minnesota and Wisconsin, concluded that one subspecific name (Reithrodontomys megalotis dychei J. A. Allen, 1895, with type locality at Lawrence, Douglas Co., Kansas) applied to all, and relegated Reithrodontomys megalotis pectoralis Hanson, 1944 (type locality at Westpoint, Columbia Co., Wisconsin) to synonymy under dychei. Our study, based upon an examination of 1350 specimens, concerns the area west of the Missouri River from Kansas and Nebraska westward to Montana, Wyoming, Colorado and northern New Mexico. Our objectives were to study variation in R. megalotis in the region indicated and to decide what subspecific names properly apply to populations of the species that occur there.

Aside from the name R. m. dychei, currently applied to western harvest mice from a large part of the region here under study, three other subspecific names need consideration:

"Reithrodontomys megalotis caryi" A. H. Howell, 1935 (type locality, Medano Ranch, 15 mi. NE Mosca, Alamosa Co., Colorado), proposed for, and currently applied to, harvest mice from the San Luis Valley, Colorado, but possibly a synonym of aztecus according to Hooper (1952:218); and

"Reithrodontomys dychei nebrascensis" J. A. Allen, 1895 (type locality, Kennedy, Cherry Co., Nebraska), proposed for harvest mice from western Nebraska and adjacent areas, but regarded as a synonym of dychei by A. H. Howell (1914:30-31).

Our comments concerning the taxonomic status of these several names appear beyond.

We are grateful to Dr. W. Frank Blair, University of Texas, for the loan of a specimen from the Texas Panhandle (TU), and to Dr. Richard H. Manville, U.S. Fish and Wildlife Service, for the loan of specimens of R. m. caryi from the Biological Surveys Collection (USNM). We are grateful also to persons in charge of the following collections for allowing one of us (Jones) to examine Nebraskan specimens of R. megalotis in their care: University of Michigan Museum of Zoology (UMMZ); University of Nebraska State Museum (NSM); and U.S. National Museum (USNM). A research grant from the Society of the Sigma Xi facilitated travel to the institutions mentioned. Specimens not identified as to collection are in the Museum of Natural History of The University of Kansas. All measurements are in millimeters, and are of adults (as defined by Hooper, 1952:12) unless otherwise noted.

Hooper (1952) did not accord separate treatment to males and females in taxonomic accounts of Latin American harvest mice because (p. 11): "In no species ... does sexual dimorphism in the measurements, if present at all, appear to be sufficient to warrant separating the sexes in the analysis." Hooper did not statistically test the validity of treating the sexes together in R....