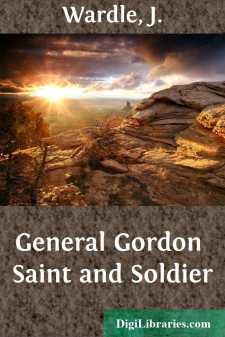 Chapter I.—Introduction—Gordon’s birth, parentage and school—His first experience of warfare in the Crimea—His display of exceptional soldierly qualities—The storming of Sebastopol and its fall.

Chapter II.—Gordon assisting to lay down frontiers in Russia, Turkey and Armenia—Gordon in China—Burning of the Summer Palace—Chinese rebellion and its suppression.

Chapter III.—Gordon at Manchester—My experiences with him—Ragged School work—Amongst the poor, the old, the sick—Some of his letters to me, showing his deep solicitude for the lads.

Chapter V.—His first appointment as Governor General of the Soudan—His journey to, and his arrival at Khartoum—His many difficulties—His visit to King John of Abyssinia, and resignation.

“There is nothing purer than honesty; nothing sweeter than charity; nothing warmer than love; nothing richer than wisdom; nothing brighter than virtue; nothing more steadfast than faith.”—Bacon.

It has been said that the most interesting study for mankind is man; and surely one of the grandest objects for human contemplation, is a noble character; a lofty type of a truly great and good man is humanity’s richest heritage.

The following lines by one of our greatest poets are true—

“Lives of great men all remind us,   We can make our lives sublime,And departing leave behind us,   Footprints on the sands of time.”

While places and things may have a special or peculiar charm, and indeed may become very interesting, nothing stirs our hearts, or rouses our enthusiasm so much as the study of a noble heroic life, such as that of the uncrowned king, who is the subject of our story, and whose career of unsullied splendour closed in the year 1885 in the beleaguered capital of that dark sad land, where the White and Blue Nile blend their waters.

“Noble he was contemning all things mean,His truth unquestioned and his soul severe,At no man’s question was he e’er dismayed,Of no man’s presence was he e’er afraid.”

General Gordon was the son of a soldier who proved his gallantry on many occasions, and who took a pride in his profession.  It was said of him that he was greatly beloved by all who served under him.  He was generous, genial and kind hearted, and strictly just in all his practices and aims.  He gave to his Queen and country a long life of devoted service.  His wife, we are told, was a woman of marked liberality; cheerful and loving, always thoughtful of the wants of others; completely devoid of selfishness.

The fourth son, and third soldier of this happy pair, Charles George, was born at Woolwich in 1833.  He was trained at Taunton.  When about 15 years of age he was sent to the Royal Military Academy at Woolwich, to prepare for the army; a profession his father thought most worthy of the Gordons.  While here at school an incident occurred which served to show that our young hero was no ordinary student.  His tutor, with an air of contempt, rebuked him severely for some error or failure in his lessons, and told him sneeringly he would never make a general.  This roused the Scotch blood of the budding soldier, and in a rage he tore the epaulettes from his shoulders, and threw them at his tutor’s feet—another proof of the correctness of the old adage, “Never prophesy unless you know.”  By the time he reached the age of twenty-one, he had become every inch a soldier, and when tested he proved to have all a soldier’s qualities—bravery, courage, heroism, patriotism, and fidelity, characteristics of the best soldiers in our army....