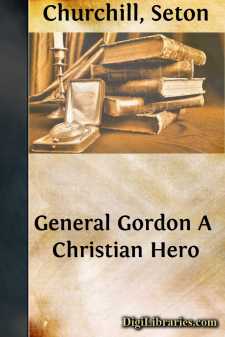 Lord Wolseley, on hearing an officer say that General Gordon was mad, remarked, in language similar to that used by George II. to the Duke of Newcastle about General Wolfe, that it was a great pity Gordon had not bitten more Generals, so that they might have been infected with some of his madness. Nor is there any reason why the motive power which could make a man do such noble deeds and lead such a splendid life should be confined to Generals. There are thousands of young men in this country who may be helped to live better lives by the study of such a Christian hero as Charles George Gordon undoubtedly was, and it is with that end in view that I have endeavoured to write a popular sketch of his life and character.

My object in adding to the number of biographies already written of General Gordon is to meet the demand for a popular book for young men and others, which will focus the events of his life into one handy volume, and which shall at the same time give a clear insight into the religious life of this Christian hero. This I have attempted to combine with a sketch of his military, political, and social life, setting forth not only the deeds of the man, but the motive which prompted them. The best writers on Gordon have taken up parts of his life only, so that no one can get a view of it as a whole without wading through a large number of volumes, some of them very ponderous. The best record of his career in China is a work by Mr. Andrew Wilson called "The Ever-Victorious Army." A smaller book by Mr. W. E. Lilley gives an interesting account of Gordon's life at Gravesend. The first part of his life in Africa is given in a larger volume by Dr. G. Birkbeck Hill, called "Colonel Gordon in Central Africa." The late Prebendary Barnes edited a small book, "Reflections in Palestine," and Mr. A. Egmont Hake has published a complete account of the hero's career at Khartoum in "The Journals of General Gordon," which were given to him in manuscript to be edited. In addition to this valuable work, the same writer, who is a distant cousin of Gordon's, has written two large volumes, embracing the whole of his life, under the title "The Story of Chinese Gordon."

The late Sir Henry Gordon has also written a biography; but though an able man and very fond of his brother, it is not generally considered that he did full justice to his memory. The brothers were widely separated in age, there being fourteen years between them; and owing to the younger one having spent so much of his life abroad, they had not seen much of each other. Colonel Sir William F. Butler has written the ablest and most interesting of all the biographies which embrace the whole of Gordon's life, but as he is a Roman Catholic, it could not be expected that he would enter largely into the religious views of his hero. The remarks he does make on the subject are, however, excellent and in good taste. Another capital sketch of Gordon has been produced by the celebrated war correspondent Archibald Forbes, who not unnaturally devotes most of his space to the military aspect of Gordon's career, and says but little about his religious life....