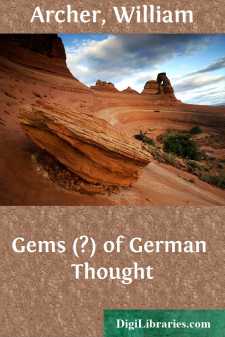 In accordance with classic precedent, this anthology ought to have consisted of "1,001 Gems of German Thought," I have been content with half that number, not—heaven knows!—for any lack of material, but simply for lack of time and energy to make the ingathering. After all, enough is as good as a feast, and I think that the evidence as to the dominant characteristics of German mentality is tolerably complete as it stands.

Though I hope it is fairly representative, the collection does not pretend to be systematic. I have cast no sweeping drag-net, but have simply dipped almost at random into the wide ocean of German thought. Some of my most precious "finds" I have come upon by pure chance; and by pure chance, too, I have no doubt missed many others. Some books that I should have liked to examine have not been accessible to me; and there must be many of which I have never heard. On the other hand, the list of books from which my gems have been selected by no means indicates the extent of my reading—or skimming. I have gone through many books and pamphlets which furnished no quotable extracts, but none that diverged in tone from the rest, or marred the majestic unison of German self-laudation and contempt for the rest of the world. I have read of (but not seen) a book by one F.W. Förster which is said to contain a protest against theoretic war-worship, and even a mild defence of England. How very mild it is we may judge from this sentence: "England has given us not only men like Lord Grey, scoundrels and hypocrites, who have this war upon their conscience; it has also given us the Salvation Army," etc., etc.

One voice the reader may be surprised to miss from the great chorus—the voice of William the Second. He is unrepresented—save in one passing remark (No. 136)—for two reasons. In the first place, his most striking utterance—the injunction to his soldiers to emulate the Huns of Attila—though almost certainly genuine, is not official, and could not be quoted without discussion. In the second place, to confess the truth, I shrank from the intolerable monotony of reading his Majesty's speeches—that endless array of platitudes in full uniform—on the chance of discovering one or two quotable gems.

Practically all my quotations are taken from books and pamphlets. The sole exceptions are a few extracts from pre-war newspapers, cited in Nippold's "Der deutsche Chauvinismus." It would have been an endless and unprofitable task to garner up the extravagances of German newspapers since the outbreak of the war; not to mention that a German anthologist could probably make a pretty effective retort by going through the files of the British war press.

Is my anthology as it stands open to a telling tu quoque by means of a selection of gems from British books and pamphlets of the type of those from which I have made my gleanings? Is it a case of the mote and the beam? I think we may be pretty confident that it is not. I doubt whether the literature of the world can show a parallel to the amazing outburst of tribal arrogance, unrestrained and unashamed, of which these pages contain but a few scattered specimens....