Garrison's Finish : a romance of the race course 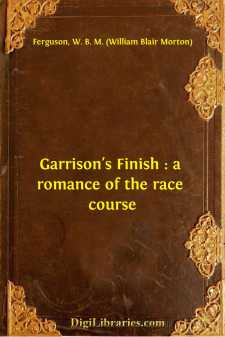 As he made his way out of the paddock Garrison carefully tilted his bag of Durham into the curved rice-paper held between nicotine-stained finger and thumb, then deftly rolled his "smoke" with the thumb and forefinger, while tying the bag with practised right hand and even white teeth. Once his reputation had been as spotless as those teeth.

He smiled cynically as he shouldered his way through the slowly moving crowd—that kaleidoscope of the humanities which congregate but do not blend; which coagulate wherever the trial of science, speed, and stamina serves as an excuse for putting fortune to the test.

It was a cynical crowd, a quiet crowd, a sullen crowd. Those who had won, through sheer luck, bottled their joy until they could give it vent in a safer atmosphere—one not so resentful. For it had been a hard day for the field. The favorite beaten in the stretch, choked off, outside the money——

Garrison gasped as the rushing simulacra of the Carter Handicap surged to his beating brain; that brain at bursting pressure. It had recorded so many things—recorded faithfully so many, many things he would give anything to forget.

He was choking, smothering—smothering with shame, hopelessness, despair. He must get away; get away to breathe, to think; get away out of it all; get away anywhere—oblivion.

To the jibes, the sneers flung at him, the innuendos, the open insults, and worst of all, the sad looks of those few friends who gave their friendship without conditions, he was not indifferent, though he seemed so. God knows how he felt it at all. And all the more so because he had once been so high. Now his fall was so low, so pitifully low; so contemptible, so complete.

He knew what the action of the Jockey Club would be. The stewards would do only one thing. His license would be revoked. To-day had seen his finish. This, the ten-thousand dollar Carter Handicap, had seen his final slump to the bottom of the scale. Worse. It had seen him a pauper, ostracized; an unclean thing in the mouth of friend and foe alike. The sporting world was through with him at last. And when the sporting world is through—

Again Garrison laughed harshly, puffing at his cigarette, dragging its fumes into his lungs in a fierce desire to finish his physical cataclysm with his moral. Yes, it had been his last chance. He, the popular idol, had been going lower and lower in the scale, but the sporting world had been loyal, as it always is to "class." He had been "class," and they had stuck to him.

Then when he began to go back—No; worse. Not that. They said he had gone crooked. That was it. Crooked as Doyers Street, they said; throwing every race; standing in with his owner to trim the bookies, and they couldn't stand for that. Sport was sport. But they had been loyal. They had warned, implored, begged. What was the use soaking a pile by dirty work? Why not ride straight—ride as he could, as he did, as it had been bred in him to? Any money, any honor was his. Instead—

Garrison, stung to madness by retrospect, humped his way through the crowd at the gates of the Aqueduct....