Gabriel and the Hour Book 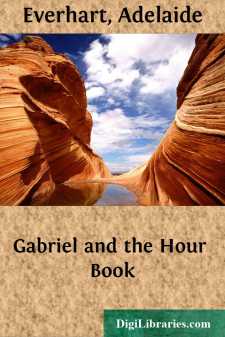 CHAPTER I. THE LITTLE COLOUR GRINDER   T was a bright morning of early April, many hundred years ago; and through all the fields and meadows of Normandy the violets and cuckoo-buds were just beginning to peep through the tender green of the young grass. The rows of tall poplar-trees that everywhere, instead of fences, served to mark off the farms of the country folk, waved in the spring wind like great, pale green plumes; and among their branches the earliest robins and field-fares were gaily singing as a little boy stepped out from a small thatched cottage standing among the fields, and took his way along the highroad.

That Gabriel Viaud was a peasant lad, any one could have told from the blouse of blue homespun, and the wooden shoes which he wore; and that he felt the gladness of the April time could easily be known by the happy little song he began to sing to himself, and by the eager delight with which he now and then stooped to pluck a blue violet or to gather a handful of golden cuckoo-buds.

A mile or two behind him, and hidden by a bend in the road, lay the little village of St. Martin-de-Bouchage; while in the soft blue distance ahead of him rose the gray walls of St. Martin's Abbey, whither he was going.

Indeed, for almost a year now the little boy had been trudging every day to the Abbey, where he earned a small sum by waiting upon the good brothers who dwelt there, and who made the beautiful painted books for which the Abbey had become famous. Gabriel could grind and mix their colours for them, and prepare the parchment on which they did their writing, and could do many other little things that helped them in their work.

The lad enjoyed his tasks at the Abbey, and, above all, delighted in seeing the beautiful things at which the brothers were always busy; yet, as he now drew near the gateway, he could not help but give a little sigh, for it was so bright and sunny out-of-doors. He smiled, though, as he looked at the gay bunches of blossoms with which he had quite filled his hands, and felt that at least he was taking a bit of the April in with him, as he crossed the threshold and entered a large room.

"Good morrow, Gabriel," called out several voices as he came in, for the lad was a general favourite with the brothers; and Gabriel, respectfully taking off his blue peasant cap, gave a pleasant "good morrow" to each.

The room in which he stood had plain stone walls and a floor of paved stone, and little furniture, except a number of solidly made benches and tables. These were placed beneath a row of high windows, and the tables were covered with writing and painting materials and pieces of parchment; for the brotherhood of St. Martin's was very industrious.

In those days,—it was four hundred years ago,—printed books were very few, and almost unknown to most people; for printing-presses had been invented only a few years, and so by far the greater number of books in the world were still made by the patient labour of skilful hands; the work usually being done by the monks, of whom there were very many at that time....