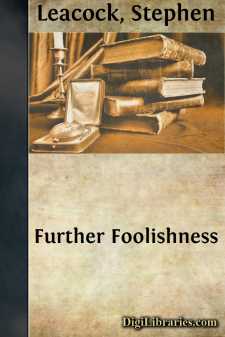 The mystery had now reached its climax. First, the man had been undoubtedly murdered. Secondly, it was absolutely certain that no conceivable person had done it.

It was therefore time to call in the great detective.

He gave one searching glance at the corpse. In a moment he whipped out a microscope.

"Ha! ha!" he said, as he picked a hair off the lapel of the dead man's coat. "The mystery is now solved."

He held up the hair.

"Listen," he said, "we have only to find the man who lost this hair and the criminal is in our hands."

The inexorable chain of logic was complete.

The detective set himself to the search.

For four days and nights he moved, unobserved, through the streets of New York scanning closely every face he passed, looking for a man who had lost a hair.

On the fifth day he discovered a man, disguised as a tourist, his head enveloped in a steamer cap that reached below his ears. The man was about to go on board the Gloritania.

The detective followed him on board.

"Arrest him!" he said, and then drawing himself to his full height, he brandished aloft the hair.

"This is his," said the great detective. "It proves his guilt."

The man was entirely bald.

"Ha!" said the great detective without a moment of hesitation. "He has committed not one murder but about a million."

"Ods bodikins!" exclaimed Swearword the Saxon, wiping his mailed brow with his iron hand, "a fair morn withal! Methinks twert lithlier to rest me in yon glade than to foray me forth in yon fray! Twert it not?"

But there happened to be a real Anglo-Saxon standing by.

"Where in heaven's name," he said in sudden passion, "did you get that line of English?"

"Churl!" said Swearword, "it is Anglo-Saxon."

"You're a liar!" shouted the Saxon, "it is not. It isHarvard College, Sophomore Year, Option No. 6."

Swearword, now in like fury, threw aside his hauberk, his baldrick, and his needlework on the grass.

"Have at you!" cried the Saxon.

They laid on and had at one another.

Thus luckily the whole story was cut off on the first page and ended.

NOTE.-This story originally contained two hundred and fifty thousand words. But by a marvellous feat of condensation it is reduced, without the slightest loss, to a hundred and six words.

Then the lure of the city lured him. His fate took him to   New York, to Chicago, and to Philadelphia.

In Chicago he lived,   in a boarding-house on Lasalle Avenue,   then he boarded—   in a living-house on Michigan Avenue....