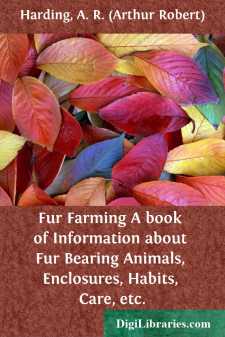 For years there has been a belief that the supply of fur-bearing animals would soon be inadequate to the demand. This belief is well founded and is apparent when the fact is known that the natural haunts and homes of the fur-producing animals are becoming less each year. The draining of swamps and marshes is destroying the homes and breeding places of muskrat and to a certain extent coon and mink. The saw mill and clearing of the land is rapidly lessening the natural resorts of coon, bear, wild cat and opossum in the South and Central States, while in the North, marten, fisher and lynx are being deprived of their natural homes.

Beaver and otter do not like civilization and leave on signs of man and his works. This is especially true of beaver; otter linger in waters fringed with timber longer even if settled.

Some animals, it is true, do well in fairly thickly-settled sections. Among animals of this kind are red fox, skunk, mink and muskrat. Yet no fur bearer can hold its numbers against the ever-increasing number of trappers and the persistency with which they now seek the fur producers.

North America furnishes a large per cent. of the furs of the world—foxes, mink, otter, beaver, skunk, marten, lynx, coon, opossum, muskrat, wolves, etc. Considerable quantities of fine furs are still secured in parts of Russia, in Europe and Siberia in Asia; Australia furnishes great quantities of opossum, while from parts of South America, the trade in chinchilla is large. Yet North America has been for centuries, the great fur-producing continent and now that trapping is being pressed harder than ever and the natural haunts of the animals are becoming less each year, the question is,—where will the future supply come from?

In this connection the following article on The Fur Markets is reproduced from the April issue of The Hunter-Trader-Trapper:

The Spring or March London Sales began March 22 and ended April 2. During that time American Raw Furs were offered by Hudson's Bay Company; C. M. Lampson & Co., and A. & W. Nesbitt. In face of the fact that prices on some articles have advanced so materially that American manufacturers have bought sparingly, the outcome of the sales was awaited with much interest by the trade.

The combined offerings of C....