Fungi: Their Nature and Uses 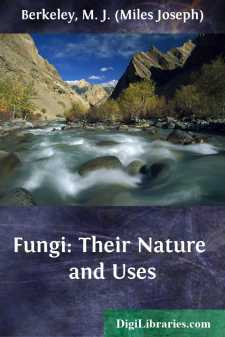 The most casual observer of Nature recognizes in almost every instance that comes under his notice in every-day life, without the aid of logical definition, the broad distinctions between an animal, a plant, and a stone. To him, the old definition that an animal is possessed of life and locomotion, a plant of life without locomotion, and a mineral deficient in both, seems to be sufficient, until some day he travels beyond the circuit of diurnal routine, and encounters a sponge or a zoophyte, which possesses only one of his supposed attributes of animal life, but which he is assured is nevertheless a member of the animal kingdom. Such an encounter usually perplexes the neophyte at first, but rather than confess his generalizations to have been too gross, he will tenaciously contend that the sponge must be a plant, until the evidence produced is so strong that he is compelled to desert his position, and seek refuge in the declaration that one kingdom runs into the other so imperceptibly that no line of demarcation can be drawn between them. Between these two extremes of broad distinction, and no distinction, lies the ground occupied by the scientific student, who, whilst admitting that logical definition fails in assigning briefly and tersely the bounds of the three kingdoms, contends that such limits exist so positively, that the universal scientific mind accepts the recognized limit without controversy or contradiction.

In like manner, if one kingdom be made the subject of inquiry, the same difficulties will arise. A flowering plant, as represented by a rose or a lily, will be recognized as distinct from a fern, a seaweed, or a fungus. Yet there are some flowering plants which, at first sight, and without examination, simulate cryptogams, as, for example, many Balanophoræ, which the unscientific would at once class with fungi. It is nevertheless true that even the incipient botanist will accurately separate the phanerogams from the cryptogams, and by means of a little more, but still elementary knowledge, distribute the latter amongst ferns, mosses, fungi, lichens, and algæ, with comparatively few exceptions. It is true that between fungi and lichens there exists so close an affinity that difficulties arise, and doubts, and disputations, regarding certain small groups or a few species; but these are the exception, and not the rule. Botanists generally are agreed in recognizing the five principal groups of Cryptogamia, as natural and distinct. In proportion as we advance from comparison of members of the three kingdoms, through that of the primary groups in one kingdom, to a comparison of tribes, alliances, and orders, we shall require closer observation, and more and more education of the eye to see, and the mind to appreciate, relationships and distinctions.

We have already assumed that fungi are duly and universally admitted, as plants, into the vegetable kingdom. But of this fact some have even ventured to doubt. This doubt, however, has been confined to one order of fungi, except, perhaps, amongst the most illiterate, although now the animal nature of the Myxogastres has scarcely a serious advocate left....