Frontier Boys on the Coast or in the Pirate's Power 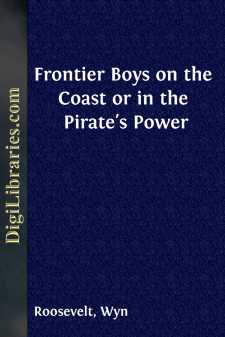 "What devilment has old Bill got on for tonight, Pete?"

The speaker was seated on an old scarred sea chest in a dimly lighted forecastle.

"I heard the mate say somethin' about a passel of four boys," put in a third man who was laying back in his bunk, "that the skipper was a-lookin' for."

"Kidnapping, eh?" said Cales, the first speaker. "Hold 'em for ransom, I suppose. Well, the old man has been in worse games than that. I reckon the kids' parents are rich and are willin' to pay a high price for their darlings."

"You're on the wrong tack, matey," said the man in the bunk. "Cap'n Brinks, who landed in San Diego from a Mexican port put the old man wise. He told him that those fellars had considerable money and a raft of jewels with 'em that they picked up in Mexico."

"Ho, Ho, that's the game, is it," cried Cales, thumping his knee with a gnarled fist, "that ought to be easy then."

"Looks so, but it ain't," replied the other, "those four boys have got somethin' of a reputation in the southwest. Hard fighters and good shots and their leader is a husky lad and about as crafty as a red Injun."

"He ain't met the Old Man yet," said Cales significantly.

"I don't see where you get all your news from, Jake," growled Pete from his seat on the chest, "you ought to be a reporter."

"I keep my eyes open and my mouth shet," replied Jake, "any man can get larned if he will do that."

"I'd like to have a picter of you with your mouth shet," remarked Pete. "It's open even when you are asleep." He dodged just in time to avoid a heavy shoe flung from Jake's ready hand that crashed against the wall.

"Don't do that agin," he warned, a red light showing in his eyes. "I'll larn you boys that I ain't as old as I looks to be."

"You mustn't keep your own mouth open so wide, Pop, cause you'll have to swallow your own words if you do."

"I guess I'll never git choked," replied Pete, truculently. "Kin you tell me what the skipper means snooping down this coast with no lights showing when it's plumb dark? We are liable to sink ourselves or Californey all of a suddint."

"Why don't you ask the Cap'n what he is up to?" inquired Cales, "that is, if you want some real useful information, Pop."

Pop raised himself up and glared at the speaker.

"I ain't done living," he replied.

"We are navigating pretty careful," remarked Jake. "You can hardly feel the Sea Eagle moving."

"Running for the cove, I reckon," suggested Cales, "I'm mighty pleased not to be the man at the wheel. Well, I'm goin' to turn in for a snooze."

In a brief time the two men were snoring loudly, while old Pete sat smoking his pipe, as stolid as a wooden Indian and the forecastle was fogged with the smoke, through which the swinging lantern shone dimly. The air is stifling so let us go up on deck where we can breathe the salt ozone and incidentally get acquainted with Captain Bill Broom, who is to occupy such a prominent place in this narrative.

He is well worth meeting, not only as the opponent of our old friend, Jim Darlington, but because of his own unworthy but interesting character....