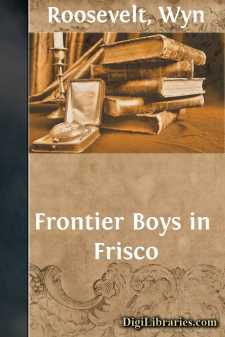 CHAPTER I ON THE ENGINE

"Would you like to ride on the engine, Jim?" asked the engineer of the south bound train.

"Nothing would suit me better, Bob," replied Jim Darlington. "I guess you can drive this black horse," nodding towards the locomotive, "as well as you did the 'four' that you drove back in Kansas across the plains, when we were boys," and Jim grinned. "Nothing like the real horse," replied Bob Ketchel, "but I can manage this fire eater all right, too."

"Trust you for that," agreed Jim heartily.

"We will be pulling out in about five minutes," remarked Ketchel; "the tourists in the eating house are just swallowing their pie now with an anxious eye on the conductor. Hope they don't choke."

"No, you're not," replied Ketchel; "go back to your luxurious caboose and get your heaviest coat and your trusty revolver; we might see some game going through the Pass," and Bob winked wisely at his "boyhood" friend.

"Don't pull out until I get back," warned Jim, as he started on a trot toward one of the rear Pullmans, called a "caboose" by the flippant Bob.

"'The General Denver' leaves in three minutes," called Ketchel after the retreating Jim; "wouldn't wait a second for nobody." From the fact that the locomotive was given the dignity of a real name indicates that the time of our narrative belongs to an earlier and more ornate day than this when even the biggest engine gets nothing more than a number.

At Ketchel's warning, Jim quickened his pace to a run, for he would not have missed that ride on the "General Denver" for all the buried wealth he and his brothers had once found on a treasure hunt in Old Mexico. I wonder if an introduction to our old friend, Jim Darlington, is really necessary. At least I am going through the formality. Jim, the leader of "The Frontier Boys," whose adventures began on "The Overland Trail," and were last spoken of in the narrative, "In The Saddle," is now on his way to San Francisco in response to a message sent to him by the engineer of his captured yacht, The Sea Eagle. He had been spending the Christmas time at his home in Maysville, New York, where his brothers, Tom and Jo, remained for the winter, much to their mother's joy, but to their own deep regret, when they saw Jim starting out on a journey whose adventures they could not share.

So much for the introduction, now to the narrative. Jim had no time to spare and he could be very prompt when he had to, as all his old friends can well remember. He swung into the black Pullman near the rear of the long train, glided through the narrow alley way between the smoking-room and the side of the car, just missing a head on collision with a stout party coming out of the sleeper. The latter was about to express a haughty indignation at Jim's abrupt approach, but that worthy gave him no chance, as he dashed for section No. 9 at the end of the car. Here he snatched from his valise his belt and revolver and fastened them with rapid precision around his waist, and then with a heavy sweater in his hand, he made a rapid exit from the car....