From the Caves and Jungles of Hindostan 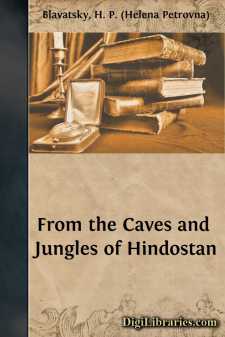 Late in the evening of the sixteenth of February, 1879, after a rough voyage which lasted thirty-two days, joyful exclamations were heard everywhere on deck. "Have you seen the lighthouse?" "There it is at last, the Bombay lighthouse."

Cards, books, music, everything was forgotten. Everyone rushed on deck. The moon had not risen as yet, and, in spite of the starry tropical sky, it was quite dark. The stars were so bright that, at first, it seemed hardly possible to distinguish, far away amongst them, a small fiery point lit by earthly hands. The stars winked at us like so many huge eyes in the black sky, on one side of which shone the Southern Cross. At last we distinguished the lighthouse on the distant horizon. It was nothing but a tiny fiery point diving in the phosphorescent waves. The tired travellers greeted it warmly. The rejoicing was general.

What a glorious daybreak followed this dark night! The sea no longer tossed our ship. Under the skilled guidance of the pilot, who had just arrived, and whose bronze form was so sharply defined against the pale sky, our steamer, breathing heavily with its broken machinery, slipped over the quiet, transparent waters of the Indian Ocean straight to the harbour. We were only four miles from Bombay, and, to us, who had trembled with cold only a few weeks ago in the Bay of Biscay, which has been so glorified by many poets and so heartily cursed by all sailors, our surroundings simply seemed a magical dream.

After the tropical nights of the Red Sea and the scorching hot days that had tortured us since Aden, we, people of the distant North, now experienced something strange and unwonted, as if the very fresh soft air had cast its spell over us. There was not a cloud in the sky, thickly strewn with dying stars. Even the moonlight, which till then had covered the sky with its silvery garb, was gradually vanishing; and the brighter grew the rosiness of dawn over the small island that lay before us in the East, the paler in the West grew the scattered rays of the moon that sprinkled with bright flakes of light the dark wake our ship left behind her, as if the glory of the West was bidding good-bye to us, while the light of the East welcomed the newcomers from far-off lands. Brighter and bluer grew the sky, swiftly absorbing the remaining pale stars one after the other, and we felt something touching in the sweet dignity with which the Queen of Night resigned her rights to the powerful usurper. At last, descending lower and lower, she disappeared completely.

And suddenly, almost without interval between darkness and light, the red-hot globe, emerging on the opposite side from under the cape, leant his golden chin on the lower rocks of the island and seemed to stop for a while, as if examining us. Then, with one powerful effort, the torch of day rose high over the sea and gloriously proceeded on its path, including in one mighty fiery embrace the blue waters of the bay, the shore and the islands with their rocks and cocoanut forests....