From Sand Hill to Pine 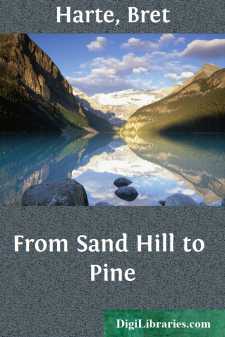 A NIECE OF SNAPSHOT HARRY'S I

There was a slight jarring though the whole frame of the coach, a grinding and hissing from the brakes, and then a sudden jolt as the vehicle ran upon and recoiled from the taut pole-straps of the now arrested horses. The murmur of a voice in the road was heard, followed by the impatient accents of Yuba Bill, the driver.

Here the voice uttered something in a louder key, but equally unintelligible to the now interested and fully awakened passengers.

One of them dropped the window nearest him and looked out. He could see the faint glistening of a rain-washed lantern near the wheelers' heads, mingling with the stronger coach lights, and the glow of a distant open cabin door through the leaves and branches of the roadside. The sound of falling rain on the roof, a soft swaying of wind-tossed trees, and an impatient movement on the box-seat were all they heard. Then Yuba Bill's voice rose again, apparently in answer to the other.

"Yes, but ye might have dropped onto it in the dark, and it's all on the down grade," responded the strange voice more audibly.

The passengers were now thoroughly aroused.

"What's up, Ned?" asked the one at the window of the nearest of two figures that had descended from the box.

"Tree fallen across the road," said Ned, the expressman, briefly.

"I don't see no tree," responded the passenger, leaning out of the window towards the obscurity ahead.

"Now, that's onfortnit!" said Yuba Bill grimly; "but ef any gentleman will only lend him an opery glass, mebbe he can see round the curve and over the other side o' the hill where it is. Now, then," addressing the stranger with the lantern, "bring along your axes, can't ye?"

"Here's one, Bill," said an officious outside passenger, producing the instrument he had taken from its strap in the boot. It was the "regulation" axe, beautifully shaped, highly polished, and utterly ineffective, as Bill well knew.

"We ain't cuttin' no kindlin's," he said scornfully; then he added brusquely to the stranger: "Fetch out your biggest wood axe—you've got one, ye know—and look sharp."

"I don't think Bill need be so d——d rough with the stranger, considering he's saved the coach a very bad smash," suggested a reflective young journalist in the next seat. "He talks as if the man was responsible."

"He ain't quite sure if that isn't the fact," said the express messenger, in a lowered voice.

"Why? What do you mean?" clamored the others excitedly.

"Well—THIS is about the spot where the up coach was robbed six months ago," returned the messenger.

"Dear me!" said the lady in the back seat, rising with a half hysterical laugh, "hadn't we better get out before they come?"

"There is not the slightest danger, madam," said a quiet, observant man, who had scarcely spoken before, "or the expressman would not have told us; nor would he, I fancy, have left his post beside the treasure on the box."

The slight sarcasm implied in this was enough to redden the expressman's cheek in the light of the coach lamp which Yuba Bill had just unshipped and brought to the window....