From Powder Monkey to Admiral A Story of Naval Adventure 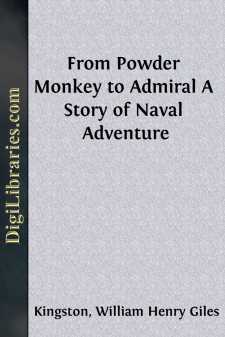 A book for boys by W.H.G. Kingston needs no introduction. Yet a few things may be said about the origin and the purpose of this story.

When the Boys’ Own Paper was first started, Mr Kingston, who showed deep interest in the project, undertook to write a story of the sea, during the wars, under the title of “From Powder-monkey to Admiral.”

Talking the matter over, it was objected that such a story might offend peaceable folk, because it must deal too much with blood and gunpowder. Mr Kingston, although famed as a narrator of sea-fights, was a lover of peace, and he said that his story would not encourage the war spirit. Those who cared chiefly to read about battles might turn to the pages of “British Naval History.” He chose the period of the great war for his story, because it was a time of stirring events and adventures. The main part of the narrative belongs to the early years of life, in which boys would feel most interest and sympathy. And throughout the tale, not “glory” but “duty” is the object set before the youthful reader.

It was further objected that the title of the story set before boys an impossible object of ambition. The French have a saying, that “every soldier carries in his knapsack a marshal’s baton,” meaning that the way is open for rising to the very highest rank in their army. But who ever heard of a sailor lad rising to be an Admiral in the British Navy?

Let us see how history answers this question. There was a great sea captain of other days, whose fame is not eclipsed by the glorious reputations of later wars, Admiral Benbow. In the reign of Queen Anne, before the great Duke of Marlborough had begun his victorious career, Benbow had broken the power of France on the sea. Rank and routine were powerful in those days, as now; but when a time of peril comes, the best man is wanted, and Benbow was promoted out of turn, by royal command, to the rank of Vice-Admiral, and went after the fleet of Admiral Ducasse to the West Indies. In the little church of Saint Andrew’s, Kingston, Jamaica, his body lies, and the memorial stone speaks of him as “a true pattern of English courage, who lost his life in defence of queen and country.”

Like his illustrious French contemporary Jean Bart, John Benbow was of humble origin. He entered the merchant service when a boy. He was unknown till he had reached the age of thirty, when he had risen to the command of a merchant vessel. Attacked by a powerful Salee rover, he gallantly repulsed these Moorish pirates, and took his ship safe into Cadiz. The heads of thirteen of the pirates he preserved, and delivered them to the magistrates of the town, in presence of the custom-house officers. The tidings of this strange incident reached Madrid, and the King of Spain, Charles the Second, sent for the English captain, received him with great honour, and wrote a letter on his behalf to our King James the Second, who on his return to England gave him a ship. This was his introduction to the British Navy, in which he served with distinction in the reigns of William the Third and Queen Anne....